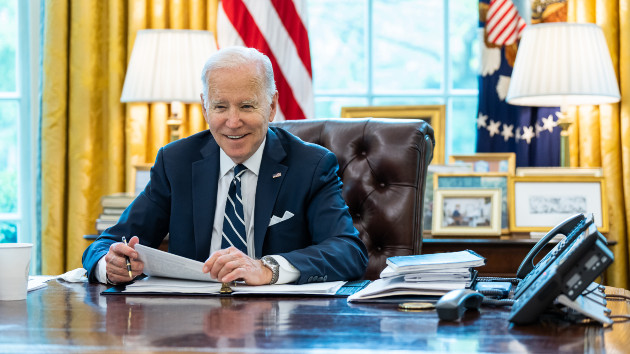 Kevin O’Connor wrote in a letter released by the White House that Biden is now only noting “some residual nasal congestion and minimal hoarseness.”

Biden on Sunday night also completed his fourth full day of Paxlovid, the COVID-19 treatment he’s been taking since he tested positive for the virus on Thursday. The president is believed to have contracted the BA.5 subvariant, which has shown increased resistance to vaccines than previous COVID strains.

Prior to Monday, Biden’s symptoms had included a runny nose, cough, sore throat, a slight fever and body aches. He had also been using an albuterol inhaler for a cough, though O’Connor’s Monday letter did not mention that.

Biden is fully vaccinated and double-boosted, though at 79 years old, he’s considered to be in a high-risk age group for severe infection.

The White House has said that 17 people are considered close contacts of the president, though no other positive tests from the administration have been reported as of Monday morning.

Biden will continue working from the White House residence until he tests negative. He had to cancel trips to Pennsylvania and Florida after contracting the virus.

Biden is still testing positive for COVID. How long will he isolate?