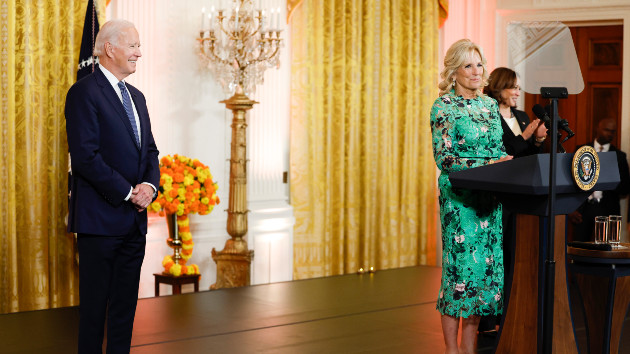 (WASHINGTON) — Celebrated by more than one billion people around the world, Diwali, the festival of lights, is a five-day religious holiday primarily observed by Hindus, Sikhs, Buddhists and Jains.

This year, for the first time in U.S. history, a history-making vice president hosted an event to mark Diwali as well.

Kamala Harris, the first person of Indian descent in her role, on Friday held a reception in honor of the festival at her residence in Washington.

“When the vice president opened up her home … many of us and our families felt seen,” said one White House staffer on planning the event. “This celebration of light will allow young people to grow up in a world knowing that they can be anything and they can celebrate where they come from with pride.”

On Monday, Harris then joined President Joe Biden and first lady Jill Biden at a large-scale Diwali event at the White House.

For a holiday characterized by lights, color, music and dancing, the night’s festivities included sparklers, the lighting of a diya — a tea light — signifying the embrace of positivity, a traditional sitar performance and dancers.

“This is the first Diwali reception of this scale, in this house, ever to be held,” President Biden said. (Because of COVID-19, he, the first lady and Harris marked Diwali via social media last year.)

“I have, personally, such fond memories of celebrating Diwali as a child,” Harris said of the festival, which as she said celebrates “good over evil, knowledge over ignorance and light over darkness.”

The vice president recalled how as a girl, “like many of you,” she, her sister and her mom returned to India to avoid monsoon season — which she noted with a laugh — to see her mother’s family for Diwali.

She described “waking up in the middle of the night, me and my sister Maya, and going, of course, to the eldest in our family, which was our grandfather. And then, later in the day, my mother would give us lit sparklers and we would go into the streets to celebrate this very important occasion.”

Diwali events at the White House began with President George W. Bush, in 2003, and have also included President Barack Obama lighting a diya in the Oval Office and then-Vice President Biden hosting a reception in 2016.

The White House described Monday’s event as an ode to community, particularly among South Asians and those who had immigrated to the U.S.

“Thank you for making this celebration of Diwali such a joyous part of American culture … Thank you for organizing cultural programs that bring us together as people,” the president said. “Thank you for reflecting the soul of who we are as a nation.”

With Asian Americans being the fastest-growing racial group in the country, according to the Pew Research Center, the administration’s Diwali celebrations this year represent the changing demographic of the nation. (Earlier this week, New York City Mayor Eric Adams announced that Diwali will be a public school holiday in 2023.)

On Monday night, Biden commented on another bit of history, citing Rishi Sunak, who is of Indian descent, becoming the first nonwhite U.K. prime minister.

“As my brother would say, ‘Go figure.’ … Pretty astounding. A groundbreaking milestone,” Biden said. “And it matters. It matters.”

Harris to visit Monterey Park to meet with victims’ families