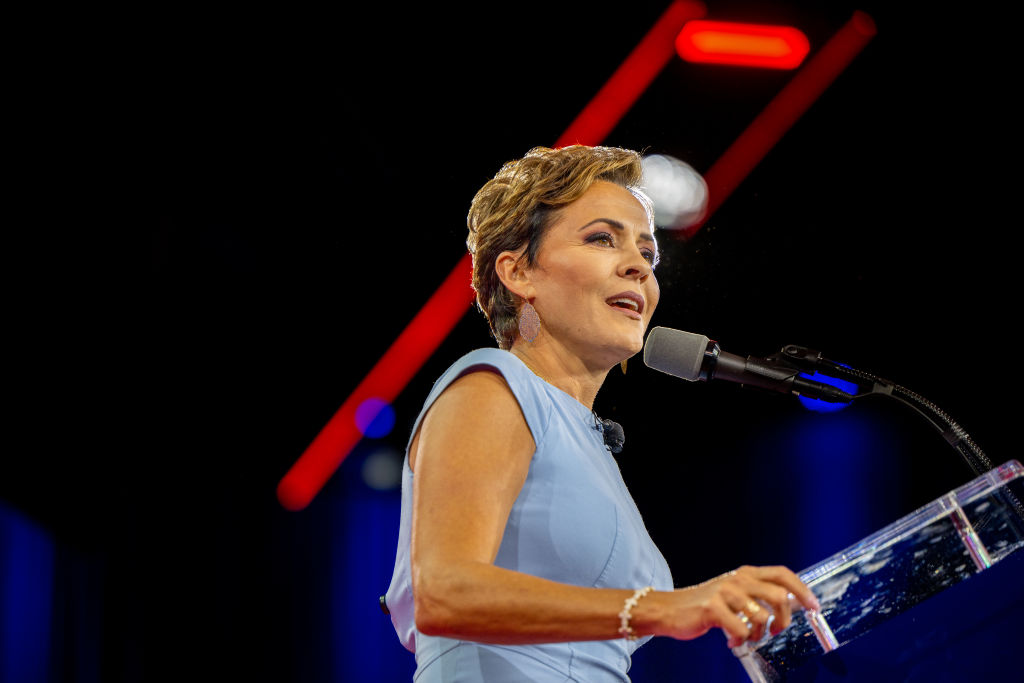 (WASHINGTON) — Former President Donald Trump’s false allegation that the 2020 presidential election was stolen continues to reverberate among GOP political candidates who are running on anti-establishment platforms and eager to gain the support of the former president’s voter base.

Kari Lake is one of those candidates. The former newscaster-turned-gubernatorial candidate in Arizona won a spot on the ballot August 4 and will face Democratic nominee Katie Hobbs in November.

In her victory speech, Lake said, “we outvoted the fraud, we didn’t listen to what the fake news had to say. The MAGA movement rose up and voted like their lives depended on it.”

When asked directly to corroborate her unsubstantiated allegation that the election system is fraudulent, she vaguely claimed, “we have a lot of evidence of irregularities and problems.”

Kari Lake, Republican candidate for governor of Arizona holds a press conference at her campaign headquarters in Phoenix, Ariz., Aug. 3, 2022.

According to an analysis by ABC News partner FiveThirtyEight, at least 120 Republican political candidates who deny the integrity of the 2020 elections will be on ballots this fall.

An additional 48 nominees have expressed doubt about the election’s integrity, meaning half of Republican candidates have “at least flirted with” denying the election, according to the FiveThirtyEight analysis.

“Concerns inside the Republican Party about voter integrity also is something that’s been going on for decades” Rick Klein, Political Director at ABC News, told “NIGHTLINE.”

“What’s different is that you had in former President Trump someone who, during the campaign, actively stowed mistrust in the system,” he added.

These claims remaining popular despite the fact that multiple lawsuits and investigations nationwide after the 2020 presidential election never came close to proving election fraud that would call into question President Biden’s victory over Donald Trump.

When asked directly about the legitimacy of the 2020 election, Dixon told a Fox News reporter, “it’s certainly a concern for a lot of folks here in Michigan because of the way the election was handled by our secretary of state.”

Earlier this summer Gibbs falsely claimed that the 2020 election results weren’t accurate, telling a local NBC station, “I think when you look at the results of the 2020 election, there are anomalies in there, to put it very lightly, that are simply mathematically impossible.”

In the coming weeks, dozens of other candidates will be decided, revealing how deeply Republican voters are invested in the former president’s claims of a stolen election.

“In a Republican primary it is a definite boon to a candidate to say that you deny the legitimacy of the last election,” Klein said.

“It gets you on the radar screen of former President Trump, who’s had a terrific track record through many of the primaries in redder states,” said Klein.

“The other thing it does is a connection to a segment of the base for whom denying the last election’s outcome is almost a mantra,” he said.

The baseless idea planted by Donald Trump that there’s rampant voter fraud and cheating at the ballot box, two allegations that have repeatedly been proven false, taking hold in the minds of many voters.

What we know about the Georgia 2020 election investigation