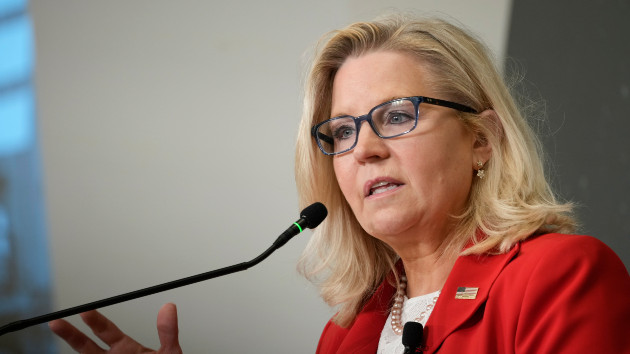 Cheney, who lost her primary last month to a challenger endorsed by former President Donald Trump, said at the Texas Tribune Festival in Austin on Saturday that she would seek to prevent Arizona Republican Kari Lake and Pennsylvania Republican Doug Mastriano from being elected to their states’ governors’ mansions.

“I’m going to do everything I can to make sure Kari Lake is not elected,” Cheney said at the closing night of the Texas Tribune Festival in Austin.

“I think we have to do everything we can in ’22 to make sure those people don’t get elected,” she added.

Turning to the governor’s race in Pennsylvania, she said, “We have to make sure [Doug] Mastriano doesn’t win.”

She also criticized Republican leaders like Virginia Gov. Glenn Youngkin for, in her words, accommodating election deniers even as she praised Youngkin because he “hasn’t bought into the toxin of Donald Trump.”

When asked if her efforts to stop Lake, Mastriano and others could include campaigning for Democrats, Cheney simply replied, “Yes.”

“In this election, you have to vote for the person who actually believes in democracy,” she said. “And that is just crucial, because if we elect election deniers, if we elect people who said that they’re not going to certify results or who are going to try to steal elections, then we really are putting the republic at risk.”

Cheney’s latest comments offer more specificity on a vow she made earlier this year while being interviewed by ABC News: to make faith in the electoral process a litmus test in the midterms.

In taking on Lake and Mastriano, Cheney is challenging two far-right Republicans who are popular with conservative voters and who could have outsized sway in two key presidential battlegrounds.

Lake has been adamant in making unfounded claims that election fraud threw the 2020 White House race and has said she wouldn’t have certified Arizona’s results from that year.

Mastriano, who has promoted similar groundless allegations, would have the power as governor to appoint Pennsylvania’s secretary of state, who oversees elections there.

After Cheney’s criticism Saturday, Lake shot back in an interview on Fox News, pointing to Cheney’s loss in Wyoming last month.

“That might be the biggest, best gift I’ve ever received. I mean, the people of Wyoming can’t stand her. I’m pretty much sure that the people of Arizona don’t like Liz Cheney,” Lake said Sunday. (Mastriano’s campaign did not immediately respond to a request for comment on Cheney from ABC News.)

Beyond Lake and Mastriano, Cheney called out Youngkin, who has said President Joe Biden was legitimately elected but who will campaign soon with Lake.

“That’s the kind of thing we cannot see in our party. We cannot see an accommodation like that,” Cheney said on Saturday.

In response to Cheney’s criticism, Youngkin’s office referred ABC News to what he said when appeared at the Texas Tribune Festival.

There, when asked about campaigning for Lake given her attacks on elections, he cited Virginia’s issues grappling with the COVID-19 pandemic — relating in particular to school closures and “economic progress” — and said, “I was elected in 2021 and therefore was able to go to work in a state that had been blue and demonstrate what I believe are conservative commonsense solutions to problems and progress that we’ve made. I think I’m uniquely positioned to share this perspective.”

Cheney’s own electoral future is unclear. After her primary loss, she launched a political group that some saw as a potential vehicle for a 2024 presidential bid of her own — a prospect she has not ruled out.

However, one thing she has ruled out is supporting Trump if he runs in two years, even going so far as to say she could leave a party that was once nearly synonymous with her last name.

“I’m going to do everything I can to make sure he is not the nominee,” she said. “And if he is the nominee, I won’t be a Republican.”