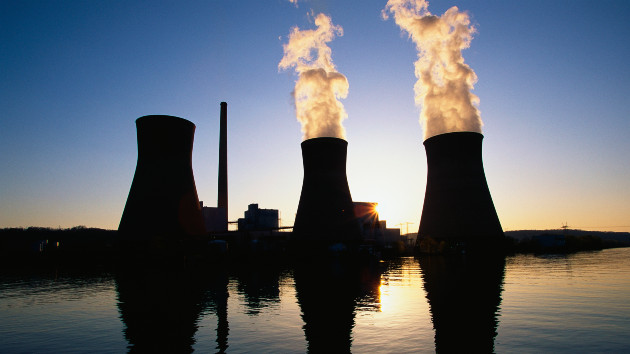 “It’s weather all over, you know what I mean. I’m not a scientist, but I just don’t believe it,” said Mayor Kay Summers of Clendenin, a Republican elected two years ago to champion the rebuilding. “Every time it rains and storms, I’m lying awake at night. I know it can happen, but I just don’t think it will happen again.”

Communities in the heart of Appalachia are some of the most vulnerable in the country to the impacts of a warming global climate, according to government scientists, and among the most resistant to government-led efforts to blunt the impacts.

They are also the front line in a landmark environmental case before the U.S. Supreme Court, which will decide this spring how much authority the Environmental Protection Agency has to regulate earth-warming emissions from coal-fired power plants.

“I have never seen flooding like I’ve seen here in the past, really in the past 20 years,” said longtime environmental activist Maria Gunnoe, whose family has lived and mined in West Virginia for generations. “We can’t continue to risk everything for energy, you know, I mean – coal keeps the lights on, they say, but at what cost?”

The region’s recovery from the 2016 flood — and continued reliance on the fossil fuel economy — illustrate the dueling human and economic stakes in West Virginia’s lawsuit against the EPA.

Eighteen states led by West Virginia and a coalition of U.S. energy companies want strict limits on EPA authority to issue rules that could transform entire industries. The Biden administration argues that Congress gave EPA significant leeway under the Clean Air Act to write regulations to stave off climate catastrophe.

“It has incredible potential to affect how EPA and other agencies write regulations for years to come,” Kevin Minoli, a former EPA acting general counsel and career civil servant, said of the case.

The outcome could dramatically shape the future of coal-dependent communities like Clendenin and the coal-fired power plants that employ thousands of workers but also generate millions of tons of greenhouse gas emissions every year.

Experts say strict limits to EPA authority could also make it impossible to cut U.S. carbon emissions in half by 2030 and entirely phase out fossil fuels like coal by 2050 — top White House objectives.

“While the EPA does have a narrow array of authority to act in the area of carbon emissions, it’s nowhere near what the Biden administration is suggesting,” said West Virginia Attorney General Patrick Morrisey, a Republican, who warns thousands of jobs, industry profits, state tax revenue and a reliable source of electricity are on the line.

While the extreme flood that submerged Clendenin was exceptional, government and academic climatologists warn that the threat of extreme rain events is growing across West Virginia, which already ranks third in the country in flooding disasters over the last 70 years.

Over the same period, the National Oceanic and Atmospheric Administration estimates more frequent and more powerful storms in the region have dumped 55% more rain.

Coal, one of West Virginia’s most lucrative exports, is used to generate a disproportionately high amount of the state’s electricity, around 90%, according to the Energy Information Administration. (Nationwide less than a quarter of electricity is produced from coal.)

The EPA argues in legal documents that Congress gave it sweeping discretion under the Clean Air Act to determine the best system of reducing greenhouse gas emissions to protect human health, and officials said this month that they are poised to release strict new limits on power plant pollution as soon as the Supreme Court rules.

“Our people want to have clean air. They want to have clean water. Absolutely. But you have to go through the process the right way,” Morrisey said. “To allow un-elected bureaucrats just to decide under the guise of good government – that’s not right. This is Congress’s decision to make, not the EPA.”

The state’s largest coal-fired power facility — the John Amos plant in Winfield, West Virginia — sits 40 miles west of Clendenin along the Kanawha River. It’s one of 174 coal-fired plants nationwide that could be impacted by the Supreme Court’s decision.

“They want to make rules but they don’t understand because they don’t walk in those shoes,” Mayor Summers said of EPA regulators.

American Electric Power, one of the nation’s largest utilities which owns the John Amos facility, granted ABC News Live rare access to see firsthand how its workforce of up to 1,000 full-time and contract workers generate enough power for two million homes and businesses across three states.

The plant burns up to 27,000 tons of coal a day during peak season, drawing on daily shipments of regional coal delivered by barge and by rail. Its three power units released 10.8 million tons of earth-warming carbon dioxide last year — or the equivalent of more than two million cars driven for a year — government records show.

In the mid-2000s, EPA regulations forced many U.S. power plants to invest in upgrading smokestacks with scrubbers that remove nearly all sulfur dioxide — a pollutant that can harm human health and contribute to acid rain.

Since then, the agency has attempted to enact new limits on power plant carbon dioxide emissions, a primary driver of global warming. Litigation has complicated that plan, but EPA expects to unveil a new approach this summer.

Energy companies nationwide, including American Electric Power, have slowly been transitioning to cheaper alternatives to coal. Twenty-eight percent of active coal-fired power plants are set to be retired by 2035.

Mullins runs West Virginia’s largest commercial solar installation in the shadow of the John Amos power plant. She says the legal fight over coal draws attention from a need to diversify the state’s energy portfolio.

“If we were to max out every available roof space in this state and all the usable land, we may be able to reach 30 percent of powering the grid — maybe,” she said.

West Virginia’s public utilities commission last year gave the John Amos plant and two other aging coal-fired facilities a new lease on life, approving more than $448 million in environmental upgrades to keep them burning coal until 2040. Part of the costs will be passed on to ratepayers.

“I think we need coal until we have enough, you know, until they figure out an alternate source,” said Ricky Brookover, a union boilermaker who works overnight installing upgrades at the Amos facility. “We put so much clean energy, clean stuff on [the plant]. Like, when you see the white smoke coming out of the stacks, it’s clean.”

Brookover, a 41-year-old father whose family has deep ties to the coal industry, says he doesn’t oppose the EPA but questions a drive to address a climate crisis he doesn’t see.

As both sides brace for a decision by the Supreme Court, environmental advocates say they fear for the worst.

“The impact here is going to be increased mining, increased pollution,” said Gunnoe. “The coal industry has always kept our people in the dark, and I don’t look for it to change.”