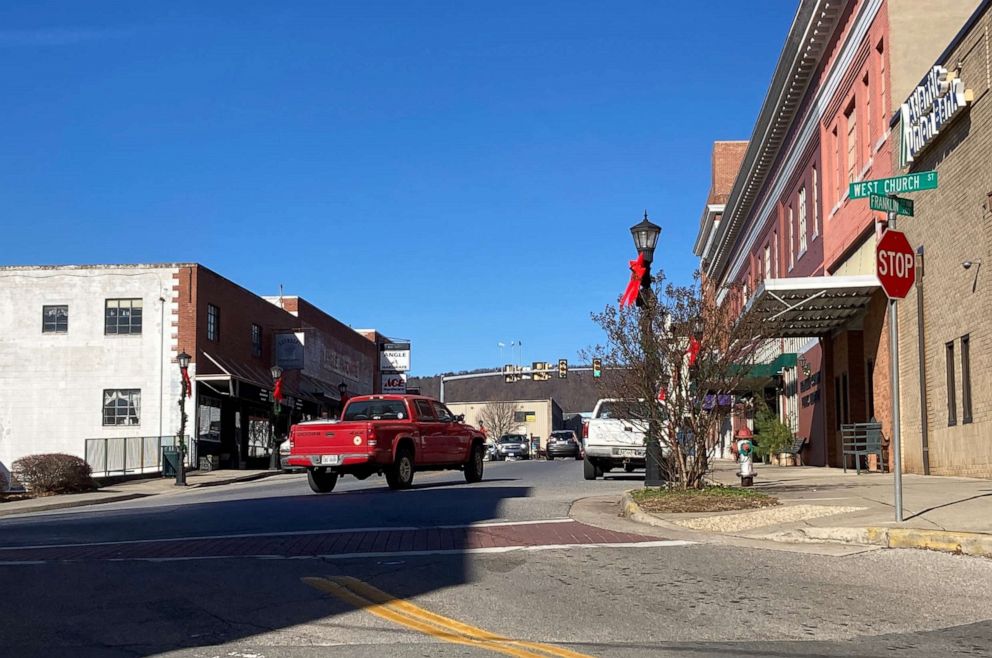 (ROCKY MOUNT, Va.) — A year after a violent mob stormed the U.S. Capitol 260 miles away, a quiet community in the foothills of the Blue Ridge Mountains is still reckoning with the fallout and ties to its Confederate past and conservative politics.

Rocky Mount, which is predominantly white and staunchly Republican, was thrust into the national spotlight on Jan. 6 after two of its active police officers were spotted among the crowd rampaging through the halls of Congress.

Jacob Fracker and Thomas Robertson, both military veterans, are among the 17 current or former law enforcement officers charged by federal authorities for alleged participation in the riot, according to an ABC News tally.

“They needed to be exposed, because it is not only just them. They’re just the body of the evil here,” said Rocky Mount native Bridgette Craighead, a small business owner, Black Lives Matter activist and former candidate for state delegate.

While the passions poured out at the Capitol surprised few – and have long since subsided, many residents say– the high-profile alleged involvement of two of their neighbors continues to roil the close-knit town.

“Everyone I’ve talked to was totally shocked that those two men would do that,” said Carol Yopp, a local artist and informal Rocky Mount historian. “In fact, I’ve never heard anyone say that they applaud them whether they agreed with what was happening or not.”

It was seven months before the riot that Fracker and Robertson were celebrated by local African American residents for standing in solidarity with demonstrators at the town’s first protest for Black Lives Matter. Cellphone video even shows the cops holding signs for racial justice and dancing the Electric Slide with organizers.

“I really felt we were the example of what a community needed to do to get through this type of trauma,” said Craighead who was encouraged by positive relationships forged that day.

On Jan. 6, however, that shining example of unity and budding personal friendships were shattered, she said. Circulation of Fracker and Robertson social media posts ripped open a deep and longstanding racial and political divide.

“I don’t see how you can support Black Lives Matter but then support the insurrection of the Capitol,” Craighead said, citing elements of racism and white power in the events that day. “It’s also hypocritical: You want us to be peaceful protesting but then you go be a part of a riot that was not so peaceful.”

Robertson wrote on Instagram that the men “attacked the government” to “stand up for their rights,” according to federal court documents. Fracker posted to Facebook: “I can protest for what I believe in.”

Craighead led calls to get the officers fired, which in turn made her a target of their supporters.

Both now-former officers have pleaded not guilty to federal charges of disorderly and disruptive conduct and obstruction of Congress. In local media interviews the men have insisted they didn’t participate in violence and that their message is not incompatible with support for black lives. Trial dates have not yet been set.

“They were both very polite gentlemen, and they were both town police officers. However, it is unfortunate that they are no longer employees of the town,” said J. Tyler Lee, a town councilman and friend of the former officers.

Lee, who at 29 is the youngest person ever elected to Rocky Mount government, has been urging his neighbors for the past year to turn the page.

“I think we have to leave the stuff a year ago, a year ago,” Lee said. “Because if we keep bringing up what happened a year ago, it’s still gonna keep punching us in the mouth. If we can just teach compassion, communication and how to balance a checkbook, those three things, I think you’re golden.”

By many accounts, healing has been slow going, and beneath the surface in Rocky Mount, emotions are still raw.

“People like to fantasize, I call it, saying you know it’s a good old Southern town and all the families get along, and everybody’s happy, etc. And I call that ‘the fantasy,’” said Franklin County school board member and Rocky Mount native Penny Blue.

Blue, who has led a campaign against the town’s Confederate monuments and symbols, considers the riot an extension of painful divisions over race, history and politics that date to the Civil War.

“Trump did not radicalize these people,” she added of the rioters, “he took advantage of what was already here in Franklin County and America.”

The influence of Donald Trump is already shaping Rocky Mount’s next chapter.

The town also tapped a new, more conservative representative to the state House of Delegates: a former member of Trump’s 2020 legal team who fought the election results, Wren Williams.

“Church and God is a big thing for us. History – we’re steeped in history and we feel as though people who don’t understand our way of life or they don’t resonate or connect with us,” Williams said of his landslide victory against Craighead in November.

Williams said he condemns the events of Jan. 6 as “riot” but that his constituents are not fixated on what he considers a small group of lawbreakers. “Go out into these small towns and actually see if anybody is talking about Jan six anymore because they’re not. They’re not discussing it,” he said.

While Williams is convinced Trump will run for president again in 2024, others in the community wait anxiously for word of the former president’s intentions. The omnipresence of Trump is complicating a path forward, some residents said.

“If you have any hope of healing, you’ve got to talk about what’s hurting,” said Rocky Mount United Methodist Church Pastor Will Waller. “I tend to believe honesty is the best policy. So, ripping off the band aid is the best way to move forward. So we talk about it. We’re unafraid here.”

A willingness to keep talking to each other was one of the few areas of common ground expressed by Rocky Mount residents on both sides of the political divide.

“We bringing up all these hurtful topics and subjects not to rub it in your face and bring up the past,” said Craighead, “but we have to bring up the past to learn from it, to move on and to heal.”

Lee agreed that respectful dialogue is essential. “At the end of the day, we all may disagree, but you still have to be able to stick your hand out and face it as a champ,” he said.

Waller said faith also has a role to play. “To grow some flowers, you got to disturb the dirt. This has been a disturbing year just like 2020 was, but I believe in growth, and it comes through sometimes seeing things messed up for a bit,” he said.