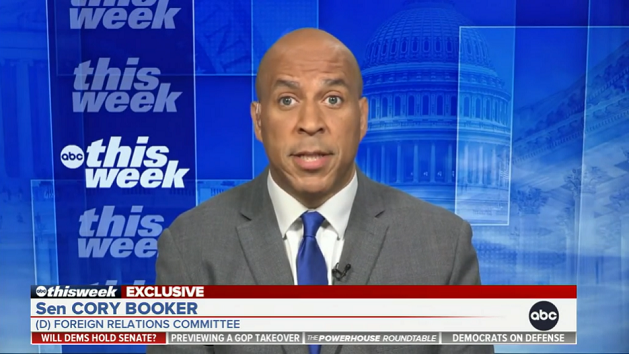 (WASHINGTON) — Sen. Cory Booker, D-N.J., said his party faces a difficult election on Tuesday amid stiff headwinds over the economy but insisted he still sees a “pathway” for Democrats to at least keep control of the Senate.

Booker noted to “This Week” co-anchor Martha Raddatz that the party in the White House typically loses seats in midterm elections but noted there are still Senate pickup opportunities for Democrats in places like Pennsylvania, Wisconsin and North Carolina.

“So, I think that this is a tough election season. It’s a midterm election, but I still see a pathway for us to maintain control of the Senate.”

Democrats earlier this summer were favored to keep control of the Senate amid an uproar over the scrapping of constitutional protections for abortion and lower gas prices, but as the calendar turns closer to Election Day, the party has been rebuffed by stubbornly high inflation and an avalanche of attack ads over crime.

While the FiveThirtyEight Senate prediction model showed Democrats as more likely to win the Senate than Republicans, the forecast as it stands Sunday shows the GOP with a 55% chance of flipping the chamber, which is currently split 50-50.

Still, Booker predicted that voters would punish Republicans at the ballot box this Tuesday over ties to election deniers and backlash over last year’s insurrection.

“There’s a lot on the line. And we have to remember, after what we saw on January 6, Republican or Democrat, we should be electing people that believe in our democracy, that believe in our tradition, and ultimately want to unite people and not divide them,” he said.

Raddatz pressed Booker on whether Democrats have a focused enough economic message heading into Election Day, asking “did Democrats miscalculate just how important this issue is?”

“I’ve heard people show receipts of what we’ve accomplished in terms of helping to lower costs,” Booker said. “We were one vote shy … of the biggest middle class tax cut, one vote shy protecting fundamental rights. The individual people I see out there campaigning are speaking towards the pocketbooks of this country and reminding people about what Donald Trump’s agenda was when he had the reins, not just economic policies that favor the rich, but also things that undermine our very fundamental beliefs as a democracy.”