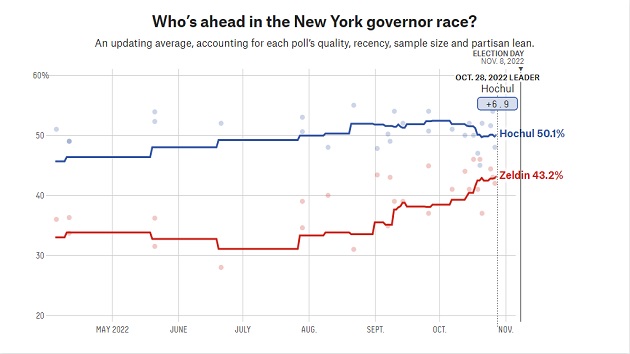 (NEW YORK) — As Democrats seek to hold onto their slim majority in Congress, one traditionally blue haven for the party has turned more competitive than expected: New York.

Prominent figures on both sides are flocking to the state as several races, especially those for governor and Congress, have tightened in the final stretch.

President Joe Biden this week made a trip to Syracuse, and first lady Jill Biden will stump for Rep. Sean Patrick Maloney and other Democratic candidates on Sunday.

Florida Gov. Ron DeSantis was on Long Island Saturday to stump for Republican gubernatorial nominee Lee Zeldin as polls show a tightening in the contest between Zeldin and incumbent Gov. Kathy Hochul.

“It was always gonna be a tough cycle. Even in a blue state like New York, not every year is gonna be one where the Democrats run the table the way they did in the last midterms in 2018,” Evan Stavisky, a Democratic political consultant, told ABC News.

Over the summer, Hochul at times held an 18-point lead over Zeldin, according to FiveThirtyEight’s polling average. Now, a little more than a week out from Election Day, Hochul’s lead is 6.9 points — still making her a frontrunner but close enough to cause some alarm among Democrats.

“When you consider that there’s a 2 million-plus Democratic registration edge, it shouldn’t be close at all,” Hank Sheinkopf, a longtime Democratic strategist based in New York, told ABC News.

Hochul’s spent a large part of her campaign casting Zeldin as an acolyte of former President Donald Trump and criticizing him for his stance on abortion. Zeldin praised the Supreme Court ruling overturning Roe v. Wade as a victory, and once voted in favor of a 20-week ban on abortion. Heading into the general election, he’s tried to shift to a more moderate stance, telling voters he wouldn’t change the state’s abortion laws.

Thomas Doherty, a political strategist and former aide to Pataki, said he thought Zeldin’s enthusiastic response to the Roe decision in a state as pro-choice as New York was “a bad mistake.”

But Doherty and other strategists said crime’s become the forefront issue in the state, as well as the economy. Those issues were front and center of the first and only debate between Zeldin and Hochul earlier this week.

“You’re poorer and less safe because of Kathy Hochul and extreme policies,” Zeldin said in his opening statement.

These past few weeks, Hochul’s been putting more emphasis on her efforts to take guns off the streets and recently announced actions to put more cops on New York City’s subways. In the debate, Hochul said she was “laser-focused” on fighting crime.

While Hochul has turned her attention toward New York City, where the turnout of reliably Democratic voters is essential to a statewide win, national Democrats have zeroed in on congressional races in suburban districts on Long Island and the Hudson Valley, often a bellwether for voters’ enthusiasm.

“A lot of this has to do with turnout. Where’s the energy? I think the energy is on the Republican side of things right now,” Doherty said. “You can sense that nationally as well and I think that’s carried over into New York.”

Republicans hope a tighter-than-expected campaign for governor will motivate GOP voters down the ballot.

Of the country’s 50 most competitive House races, according to FiveThirtyEight, seven are for New York seats. Five will be defended by Democratic incumbents, including Maloney’s 17th congressional district. Maloney, chairman of the Democrats’ congressional campaign arm, touted the president’s plan to invest in manufacturing jobs in the Hudson Valley and upstate New York on ABC News’ “This Week.”

Asked by ABC’s Chief Washington Correspondent Jonathan Karl if he’d support a Biden bid for reelection, Maloney did not commit. “Look, the president will make that decision,” he said.

Forecasters at the Cook Political Report recently changed the race between Maloney and Republican Mike Lawler from “leans Democrat” to “toss up.”

The party is still favored to keep power there and in the neighboring 4th district, according to forecasters the Cook Political Report, where candidates are jousting for a long-held Democratic seat that shades moderate. Both Republican Anthony D’Esposito and Democrat Laura Gillen bucked their own party in a Newsday debate, D’Esposito insisting that “[abortion] is not on the ballot in New York” and Gillen taking aim at cashless bail, a policy advanced by Democrats in Albany.

Rep. Pat Ryan, who won a summer special election in the 19th district largely on the progressive momentum gained after the Dobbs case, will have to defend a Democratic seat in the 18th District on Election Day because of redistricting.

It will be a test of Democrats’ enthusiasm at the halfway point of Biden’s term in a state that sent him to the White House by 23 points.