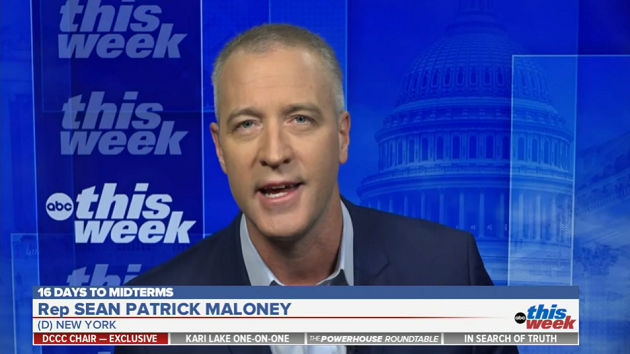 (WASHINGTON) — New York Rep. Sean Patrick Maloney, the chair of House Democrats’ campaign arm, insisted on Sunday that his party will buck both history and the current polling in November’s midterm elections.

In a lively interview with ABC “This Week” co-anchor Jonathan Karl, Maloney pointed to special election wins in Alaska and New York, where Democrats won in tough areas, to suggest that the party remains well situated heading into Election Day.

“You guys have been writing us off for two years, and we just went to work fixing people’s problems,” he said. “We know it’s going to be hard,” he continued. “My mom used to say, ‘Everything good in life is hard. You’ve got to go work.’ That’s what we’re going to do.”

Despite that optimism, the GOP is favored to win control of the House this midterm cycle, according to FiveThirtyEight’s analysis, in part because of voter concerns on the economy, inflation and crime and the edge they give to Republicans on those issues. Also working against them is President Joe Biden’s low approval rating, hovering just above 41%.

But Maloney said on “This Week” that the election wins this summer, Democrats’ legislative successes on health care costs and other issues and the public’s backlash to the overturning of Roe v. Wade showed his party remained competitive.

“What do you say we let the voters speak? Because when they have spoken, it turns out they care that this MAGA crowd has taken away 50 years of reproductive freedom, all of the privacy rights we used to take for granted,” Maloney argued. “It turns out they care that we’re making progress on the problems, and we have a plan to bring down your costs to help our seniors, to help our veterans, to bring jobs back to the United States.”

Karl pressed Maloney on the extent to which Biden hasn’t campaigned for swing-state Democrats, compared to the numerous rallies and trail appearances made by Presidents Barack Obama and Donald Trump in past midterms.

Maloney noted that in those election cycles, in 2010 and 2018, their parties went on to lose dozens of seats in Congress.

“Is that what you’re worried [would] happen?” Karl followed up.

“I guess we’ve got a strategy that might work out better than those,” Maloney said.

Biden has made relatively few trips to battlegrounds this year, though he was in Pennsylvania for Senate nominee John Fetterman last week and will headline a rally with Democratic candidates in South Florida on Nov. 1.

Karl pointed back to Maloney’s vow, in late 2020, that Democrats would pick up seats this cycle. “We’re going to break that curse … Write it down,” Maloney said then.

“As you can see, we wrote it down. You still think you are going to win seats — pick up seats in the House?” Karl asked.

“Well, why not?” Maloney contended. He also projected confidence about his own chances for reelection despite a House GOP-leadership aligned super PAC pouring millions into the race.

“They’re gonna lose this seat and wish they had the $7 million in other races,” Maloney said.

But Democrats are facing serious political headwinds, with surveys repeatedly showing Republicans running ahead of them on some of the key issues that Americans say will decide their vote, such as high inflation.

A new ABC News/Ipsos poll showed conservatives had solidified that advantage on being trusted more — by double digits — on the economy, gas prices and crime. The GOP has blamed Democrats’ control of Washington for such problems.

Maloney pushed back on Sunday.