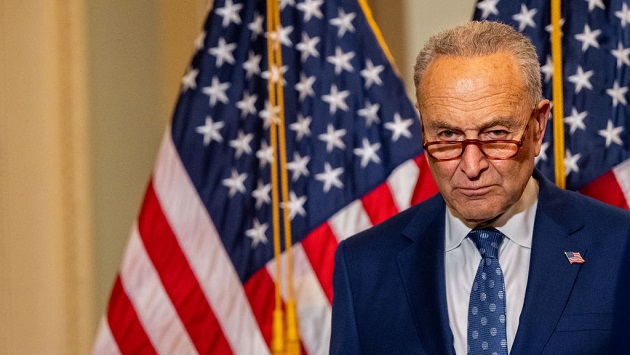 (WASHINGTON) — Senate Democrats have reached agreement on a key portion of a revised domestic policy bill, once known as Build Back Better, which would allow Medicare to negotiate prescription drug prices, according to a source familiar with the matter.

Democrats have worked for years to give Medicare this power, always falling short in the face of GOP opposition, but this time they hope to move it forward as part of a broader, as-yet-unfinished economic package, anxious to provide relief to voters buffeted to tackle sky-high inflation and a possible recession.

Since centrist Democrat Joe Manchin of West Virginia abruptly scuttled President Joe Biden’s signature domestic agenda proposal last December over fears of rising inflation — surprising the White House and his party by announcing his decision on Fox News — he has been working intensely behind the scenes with Senate Majority Leader Chuck Schumer on a smaller bill that would still advance under special rules that require a mere simple majority — or in this case just Democratic votes — for final passage, with Vice President Kamala Harris breaking an expected tie.

“Senator Manchin has long advocated for proposals that would lower prescription drug costs for seniors and his support for this proposal has never been in question. He’s glad that all 50 democrats agree,” Manchin spokeswoman Samantha Runyon told ABC News of the deal, first reported by the Washington Post.

Republicans have kept up a united front against the legislation, branding it Democratic socialism and claiming the broader legislation — originally carrying a $2.2 trillion price tag but is expected to be dramatically reduced in the revised version — would only exacerbate inflation.

The broader economic bill still has a long way to go and is not expected to be finalized for weeks, according to two Democratic aides, but this deal announced Wednesday was submitted to the Senate’s rules-keeper, the parliamentarian, for her to begin the lengthy and detailed process of ensuring the measure fits within the strictures of the expedited process Democrats intend to employ, called “reconciliation,” according to a source familiar with the matter.

The move by Sen. Schumer “demonstrates major progress and shows leadership’s commitment to trying to move forward with a bill on the floor as early as next month,” the source told ABC News.

The current deal, according to a summary of the provisions obtained by ABC News, would allow Medicare to begin negotiating the cost of certain prescription drugs next year; for the first time cap Medicare recipients’ out of pocket costs at $2,000 annually while offering premium assistance to more low income seniors; and penalize drug manufacturers that raise the cost of drugs higher than inflation by requiring companies pay a rebate back to seniors for those higher prices.

All vaccines would be available for free to seniors under the plan.

Also for the first time, Democrats — wary of a GOP administration not implementing this policy — plan to close what they call the “rogue HHS secretary loophole.” The aim of the provision, according to the summary, would be to require the secretary “to negotiate the maximum number of drugs each year, to the extent that number of drugs qualify for negotiation.”

“The prescription drug bill released today went from bad to worse for patients. Democrats weakened protections for patient costs included in previous versions, while doubling down on sweeping government price-setting policies that will threaten patient access and future innovations. In fact, they are proposing to repeal a policy that would have directly lowered costs at the pharmacy for millions of seniors in favor of a new price-setting scheme. The bill also ignores the role of middlemen and insurers in determining patient out-of-pocket costs,” said Debra DeShong, PhRMA’s Executive Vice President of Public Affairs, in a statement, adding, “Patients deserve better.”

The two major remaining items expected to be in the broader economic package — energy and climate provisions, along with tax reforms — are still being negotiated by Schumer and Manchin.

The original $1.75 trillion legislation passed the House in November, but Manchin – expressing fears of rising inflation, abruptly bowed out of negotiations with President Biden and administration officials, shocking all concerned.

The centrist Democrat took to “Fox News Sunday” in December to announce his opposition.

The Medicare prescription drug negotiation component in that bill would have included up to 20 name-brand drugs by 2028. It is unclear if that would still be the case in the current deal.

Democrats involved in the matter dodged questions about timetables for passage of any final deal, cognizant of the fact that an intense focus on missed deadlines plagued the first iteration of the legislation.

But there is little doubt that the month-long August recess looms large with the focus afterward on funding the government by Oct. 1 and the crucial midterms that may very well alter the power structure in Congress. Democrats are also very wary of scaring off the mercurial Manchin with any pressure, despite knowing that a major economic package could potentially boost their political chances significantly.