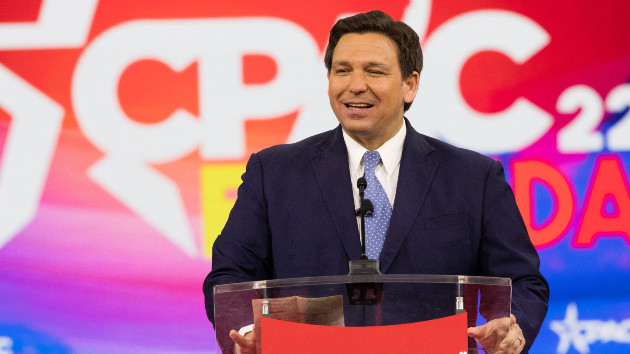 “The ‘woke’ is the new religion of the left,” DeSantis said to raucous cheers during his appearance at the four-day affair. “It’s about tearing up the fabric of our society and trying to replace it with something that will be much, much more sinister.”

He cemented his introduction as “America’s Governor” by stressing his moves during the two years of the pandemic that have triggered his rise as a Republican Party star.

“In Florida, we reject the biomedical security state which erodes liberty, harms livelihoods and divides our society. And we not only reject it if it’s government, we have done things like ban vaccine passports and mandates because it’s unacceptable to simply subcontract out Fauci-ism to big companies,” he said.

His position may have helped him in CPAC’s 2024 GOP presidential nomination straw poll, in which he was the only potential candidate gaining ground on Trump. Capturing 28% of the vote, DeSantis was favored far more than other GOP prospects, including other CPAC speakers Mike Pompeo, Kristi Noem and Ted Cruz, who all got less than 2%.

Trump handily won the conference’s poll, but his 59% total was a stark drop from the 70% he earned in a CPAC straw poll in Dallas last July.

Even so, support for a Trump bid as GOP nominee in the 2024 election was underscored throughout the conference. Rep. Matt Gaetz, R-Fla., former Trump adviser Kimberly Guilfoyle and Rep. Marjorie Taylor Greene, R-Ga., all signaled what they hoped would be the twice-impeached president’s second term in the White House.

But notably missing from Trump’s cheering squad was the increasingly popular governor of the Sunshine State.

In a recent CNN poll, DeSantis is the only Trump-alternative GOP potential candidate who pulled more than 20% approval.

Yet any love lost between DeSantis and Trump did not seem to dent Trump’s potential presidential ambitions.

“We have no choice. We have to fight like Hell,” Trump told an enthusiastic crowd of thousands at the CPAC conference Saturday evening.

Republicans now see an advantageous political climate, where digging into a battle against the alleged “woke” agenda may resonate with an electorate that increasingly finds Democrats less reliable. Heading into Tuesday’s State of the Union address, Biden and his administration are currently seeing political vulnerabilities.

Biden’s approval rating is at a career low — 37%, according to a new ABC News/Washington Post poll. The only other presidents who have entered with lower approval ratings are Gerald Ford and Donald Trump. Perhaps most concerning for Democrats, nearly half the country (50-40%) say they prefer the next Congress be held by Republicans and a check to the Biden administration, per the same survey.

While the term “woke,” according to Merriam Webster, simply means being “aware of and actively attentive to important facts and issues (especially issues of racial and social justice),” over the past few years it’s been championed by Democrats as they push for sweeping progressive social change, and, in turn, has become something of a dog whistle for conservatives, a catch-all term for what they call destructive, even authoritarian, left-wing ideologies, meant to threaten Americans.

And at this year’s CPAC, several rumored candidates for the Republican contest to snatch back the White House from Biden in the next presidential election parroted this “anti-woke” messaging.

Former Trump Secretary of State Mike Pompeo hammered into conservative ethos during his speech, cautioning that the left is trying to minimize their ideals by teaching critical race theory, an academic concept analyzing the relationship between race and law in America.

“We know that this is a nation with a deep Judeo Christian footing. We must defend it at every turn,” Pompeo said.

“I battled, I battled adversaries all across the world…There is no threat and break into the United States than that which emanates inside of our Republic. Emanates inside our school system,” he said.

South Dakota Gov. Kristi Noem, an ally of Trump who has counted out a presidential run if Trump throws his hat into the ring, said Democrats “trampled civil liberty” by promoting vaccination and mask mandates in their jurisdictions while echoing grievances of a divisive left that champions “cancel culture”

“The left divides us based on our differences. Conservatives, we unite around our shared values,” said Noem. “The left crushes free speech, conservatives celebrate free expression. The left says America is racist and that it’s evil. Conservatives know America is not the sum of our past mistakes.”

“The threats in our country have never been greater,” said Cruz. “I’m going to suggest that the fundamental conflict that is playing out across this great nation is a battle between power and liberty.”

Hawley pushed conspiracy into the culture wars, suggesting the Biden administration is playing hardball against parents who oppose mask wearing at their childrens’ schools.

“[Biden] has turned the FBI of the United States on the parents of the United States. Can you believe it? Treating School Board parents at school boards as if they are domestic terrorists, sending FBI agents to go and knock on people’s doors, if they have the temerity to stand up and say ‘I don’t want my kids dad to be masked in school,"” Hawley said.

From financiers to UFO believers, scores of GOP megadonors are flocking to DeSantis