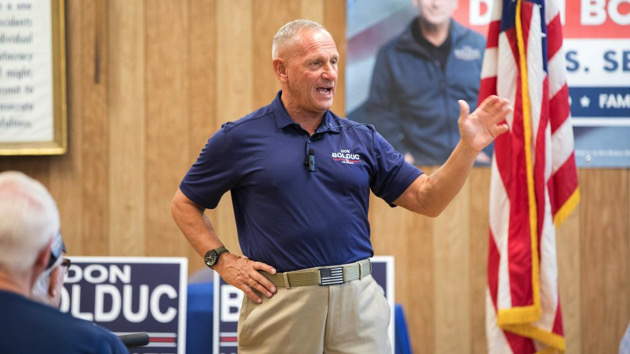 Bolduc defeated a field including state Senate President Chuck Morse. With 87% of the vote in, Bolduc led the field with 37% of the vote, compared with 36% for Morse.

Bolduc hailed his win, saying his victory helped put Republicans “one step closer towards defeating” first-term Democrat Maggie Hassan, one of the Senate’s most vulnerable incumbents.

Morse, meanwhile, tweeted overnight that “It’s been a long night & we’ve come up short” and said he “called and wished all the best” to Bolduc.

Bolduc’s primary win marks a defeat for establishment Republicans in New Hampshire and Washington, D.C., seeking to elevate Morse, whom they viewed as a more electable candidate to put up against Hassan.

Morse boasted that he’d look to work across the aisle while Bolduc sparked worries over a years-long reputation of courting controversy.

Among other things, Bolduc called popular Republican Gov. Chris Sununu a “Chinese Communist sympathizer,” said U.S. forces should “get in there on the ground” in Ukraine, advocated for the repeal of the 17th Amendment codifying direct popular election of U.S. senators and accused then-President Donald Trump of rigging the 2020 Senate primary that Bolduc lost by endorsing an opponent.

Neither Bolduc nor Morse has as beefy a war chest as Hassan, though Bolduc’s fundraising has been particularly anemic.

Amid rising concern over Bolduc’s polling lead late into the primary race, Republicans in Washington and Concord mobilized to blunt his momentum.

Some Democrats, meanwhile, sought to undercut Morse, seemingly in the belief that elevating Bolduc would net them a more beatable foe. Senate Majority PAC, which has ties to Senate Majority Leader Chuck Schumer, D-N.Y., released an ad tying Morse to McConnell, who has drawn the ire of Trump and his diehard supporters in the grassroots.

McCarthy rolls out House GOP ‘Commitment to America’ ahead of midterms