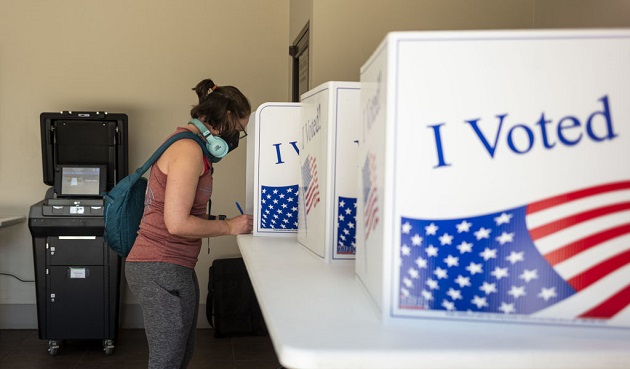 (WASHINGTON) — Voters were heading to the polls Tuesday for primary elections in Pennsylvania, North Carolina, Kentucky, Idaho and Oregon amid a midterm season that will test the endorsement power of both President Joe Biden and former President Donald Trump.

Here is how the news is developing today. All times Eastern. Check back for updates.

ABC News Congressional Correspondent Rachel Scott was the only network reporter with Dr. Oz as he voted this morning in Pennsylvania. On his way out, Oz told Scott he’s confident he will win this evening’s primary. But a last-minute surge by conservative commentator Kathy Barnette has now shaken up the race.

When Scott asked Dr. Oz about her momentum, he said, “I think that Kathy, metaphorically, had her moment in the sun.”

“And I’m very proud of the president’s endorsement. He said I was smart-talking — never let you down, smart enough to understand the issues tough, tough enough to not weather in the face of criticism. When you go to bed at night, you know, I’ll never let you down,” he added.

“I just cast a vote for myself, which is not a humble thing to do,” Oz said. “But it’s what I’m humbly asking all Pennsylvanians to do to vote for someone that they know will win in the general election which is one of the main reasons President Trump endorsed me.”

May 17, 5:23 pm
McCormick speaks about missing out on Trump endorsement

McCormick did not get the coveted endorsement from former President Donald Trump, who threw his weight behind Dr. Mehmet Oz, so McCormick tried to balance complimenting the former president and saying Trump’s endorsement doesn’t have much impact.

“He’s very popular in Pennsylvania with good reason, in my opinion, but in terms of his endorsement — of course, his endorsement matters — but his endorsement to Mehmet Oz hasn’t had much of an impact,” McCormick said. “And the reason for that is much more about Mehmet Oz than it is about the president in that Mehmet doesn’t have a track record.”

Recent polls have shown many Pennsylvania voters were still undecided leading up to primary day.

Here’s what time the polls close in each state Tuesday. All times Eastern.

Tuesday’s primaries span five states, the most so far this season, and will test of the strength of endorsements from both President Joe Biden and former President Donald Trump.

Biden handed out his first endorsement just a few weeks ago to Oregon incumbent Rep. Kurt Schrader in a race that was low profile until the president weighed in.

Trump has interjected himself in several primary races so far, including backing Dr. Mehmet Oz for Senate in Pennsylvania and Doug Mastriano for the state’s governor.

The state is one of several battlegrounds across the country where supporters of Trump tried to overturn the 2020 election results, and Mastriano attended the rally preceding the Jan. 6 attack on the Capitol, as did Kathy Barnette, a dark horse ultra-conservative GOP Senate candidate.

One question that will be answered Tuesday night is if the Trump endorsement can save tainted candidates. Trump put his neck out for two 26-years-olds in North Carolina: GOP Rep. Madison Cawthorn, widely known across the country for his scandals and irreverent attitude, and Bo Hines — running for Congress in North Carolina’s 13th Congressional District where he doesn’t live or have wide name recognition.