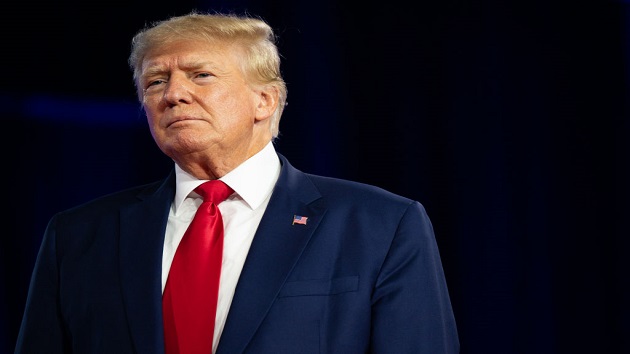 (NEW YORK) — Donald Trump’s Mar-a-Lago estate was searched in August by FBI agents as part of what the Justice Department said is a criminal investigation into alleged classified documents taken with him when he left the White House.

The unprecedented operation represented a significant step in the investigation, according to outside law enforcement experts.

Court papers in the case show the search was related to possible violations of criminal statutes, including one under the Espionage Act. Trump has said he did nothing wrong.

It isn’t the only legal issue in which he is involved. He or his businesses are at the center of various lawsuits, civil and criminal cases across the country. They deny wrongdoing and argue in response that are victims of overzealous prosecutors or political persecution.

Trump, who is openly teasing another bid for the presidency, has contended Democrats want to keep him from regaining the White House.

The allegations are serious: In New York, for example, the state attorney general is probing suspected financial fraud by the Trump Organization while a district attorney in Georgia investigates the former president’s attempts to overturn his 2020 election loss.

Meanwhile, a House select committee investigating the Jan. 6, 2021, attack on the Capitol has focused on what it says was Trump’s sophisticated, multi-step plan to illegally remain in power, including inciting his followers to riot that day as Congress gathered.

Here is a recap of the major ongoing investigations involving Trump.

As ABC News reported in May, the Justice Department opened a grand jury investigation related to Trump’s alleged mishandling of classified documents following the revelation that he had brought boxes of documents with him to his Mar-a-Lago estate when he left the White House in January 2021.

On Aug. 8, FBI agents searched Mar-a-Lago and appeared to seize 27 boxes — including sets of documents of various classifications ranging from confidential to top secret and more — according to unsealed court documents.

A redacted copy of the search warrant and related papers indicates that among the potential crimes the DOJ is investigating one could be a violation of part of the Espionage Act involving the gathering, transmitting or loss of defense information.

The other two areas of DOJ concern are 18 USC 2071, which involves any federal government employee who willfully and unlawfully conceals, removes, mutilates, obliterates, falsifies or destroys public records; and 18 USC 1519, obstruction of justice.

Trump has been calling for the affidavit supporting the search warrant to be released unredacted but his attorneys have not taken any action asking the judge to release the affidavit. A group of media companies, including ABC News, have gone to court asking for the release of the affidavit, or a redacted version of the affidavit. They cite the high public interest in the search. The DOJ opposes making the document public, stating it would compromise the integrity of the ongoing investigation. A judge has signaled he may order portions unsealed with DOJ redactions.

In a statement, Trump spokesman Taylor Budowich contended that the documents seized by FBI agents were declassified and played down the items that were taken as “the President’s picture books” and “a ‘hand written note.”

“This raid of President Trump’s home was not just unprecedented, but unnecessary … This is outrageous,” Budowich said.

The 11-member House panel, formed last year, held eight public hearings this summer on the findings of their year-long, continuing investigation into what led to the Capitol insurrection and what Trump knew about it and did and did not do before and during the rioting.

The special committee’s hearings placed Trump at the center of what they described as an “attempted coup.” Witness testimony ranged from former Trump White House staffers — including Trump’s daughter Ivanka Trump and her husband, Jared Kushner — to election administrators who testified about Trump’s actions and state of mind.

Trump, the committee argued, was well aware of the fact that he lost the 2020 election to Joe Biden but still heavily pressured the DOJ, local officials and Vice President Mike Pence to overturn the results — and he understood the threat of violence on Jan. 6 when he encouraged his supporters to march to the Capitol.

The committee, seven Democrats as well as two Republicans who will leave Congress in 2023, will reconvene in September as evidence collection continues after, they have said, a deluge of information was sent to them in the wake of their hearings in June and July.

The Manhattan district attorney has been investigating whether Trump or his family business, the Trump Organization, misrepresented the value of his assets to obtain loans or tax advantages.

District Attorney Alvin Bragg took over the long-running probe from former Manhattan DA Cy Vance in January. But since then, two high-profile prosecutors on the case resigned and a grand jury expired without issuing any indictments. Bragg said in April the investigation was continuing and that his office was “exploring evidence not previously explored.”

The investigation has led to charges of tax fraud against Allen Weisselberg, the longtime CFO of the Trump Organization. He initially pleaded not guilty, but subsequently pleaded guilty to 15 counts in total — including grand larceny and tax fraud — and agreed to testify against the Trump Organization when the company goes on trial in connection with an alleged compensation scheme beginning in October.

Weisselberg will serve five months in prison, be under supervision for five years and pay a $1.94 million penalty. His plea agreement does not require him to testify against Donald Trump or other members of the Trump family.

New York State Attorney General Letitia James is investigating whether to bring a civil lawsuit against Trump and his business for potential financial fraud. James launched her probe after Michael Cohen, Trump’s longtime former personal attorney (whom Trump has since dismissed as a “fraudster”), testified before Congress that Trump inflated and deflated his assets when it was financially beneficial for him.

Trump filed a lawsuit against James, a Democrat, claiming she was targeting him out of political animus. But a judge struck down his argument in May, allowing James’ investigation to continue.

Trump, his daughter Ivanka and his son Donald Jr. have all been deposed in the probe. During Trump’s questioning under oath earlier this month, he cited his Fifth Amendment protection against being made to testify against himself.

Trump has called James “racist” and said her work was part of a “Banana Republic.”

Willis has convened a special grand jury to investigate Trump’s actions. The grand jury will meet for up to a year and has already issued subpoenas to Republican Sen. Lindsey Graham and Trump attorney Rudy Giuliani, though it does not have the ability to return an indictment and can only make recommendations.

Another grand jury would need to be convened in order to bring forward any charges.

Trump responded to the formation of the grand jury by criticizing Willis as a “radical left Democrat” and doubling down that his call to Georgia Secretary of State Brad Raffensperger to find the votes was “perfect.”

Giuliani is one target of the probe. He appeared before the grand jury in August.

A spokesperson for the Trump Organization said at the time the probe was a continuation of a “witch hunt” against Trump.

E. Jean Carroll, a former Elle columnist, sued Trump in 2019 for defamation after he denied her rape allegation. The former president asserts he has never met her and claimed Carroll made up her account to sell a book.

The trial is set to begin in February, Judge Lewis Kaplan recently wrote in a scheduling order. Carroll’s attorney Roberta Kaplan has told ABC News the parties are “actively engaged in document discovery, with depositions to follow, and Judge Kaplan has ordered that discovery must be completed by the middle of November 2022.”

Trump attempted to countersue Carroll on the grounds that her defamation suit was baseless, but his effort was rejected by Kaplan in March.

Cohen, Trump’s former attorney, is claiming Trump retaliated against him for writing a tell-all memoir. In his lawsuit, Cohen alleged he was sent back to federal prison and put in solitary confinement for 16 days as punishment.

His lawsuit, filed in Manhattan federal court in December, seeks damages for “extreme physical and emotional harm” and violations of his First Amendment rights. Trump filed a motion to dismiss the lawsuit in April, arguing he’s shielded by presidential immunity.

A judge in Manhattan heard arguments in the case earlier this month, Cohen’s attorney Jeffrey Levine wrote on Twitter.