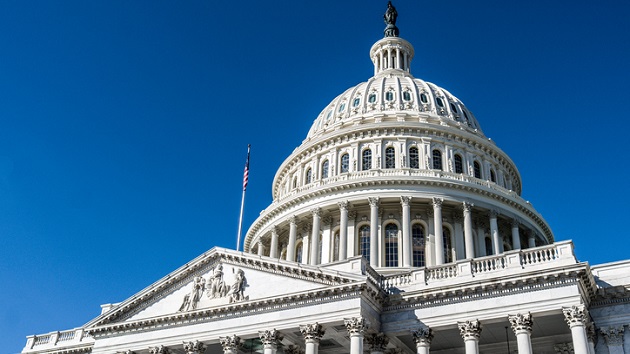 (WASHINGTON) — The House of Representatives voted Tuesday to recognize House staff members’ right to unionize after announcing an increase to their minimum pay. The vote was straight down party lines, with 217 Democrats voting for the measure and 202 Republicans voting against it.

“Congressional staffers deserve the same fundamental rights and protections as workers all across the country, including the right to bargain collectively,” House Speaker Nancy Pelosi, D-Calif., said in a statement on Friday.

“This is also an issue of fairness, as many of the youngest staffers working the longest hours often earn the lowest salaries,” Pelosi said in the statement.

The Congressional Workers Union launched in February it says after a survey distributed by the Congressional Progressive Staff Association found that 91% of the 516 staff surveyed want more protections to give them a voice at work.

It has since been pushing for the House to take up the resolution introduced by Rep. Andy Levin, D-Mich. with 165 House co-sponsors, all of whom are Democrats. An earlier April 29 deadline to do so was not met.

“Many of us write and work tirelessly to advance the very laws that protect and promote every worker’s right to organize. We deserve those same rights–Congress should not be above the laws it creates,” The Congressional Workers Union wrote in a letter to Pelosi and other leaders.

The Democratic Congressional Campaign Committee and the DCCC Staff Union announced they are voluntarily recognizing its staff union Tuesday as well. The union is organized as part of Teamsters Local 238.

“Today’s voluntary recognition is a testament to our shared commitment to live the values we fight for – both at the ballot box and within our places of work,” DCCC executive director Tim Persico wrote in a statement.

The union is now the largest collective bargaining unit in the Democratic Party.

“We are eager to meet at the bargaining table, roll up our sleeves, and secure a contract to guarantee the DCCC is the best place to work in Democratic politics for all current and future staff,” said Jacob Haythorn, a representative for the DCCC Staff Union, in a statement.

The $45,000 minimum pay for congressional staff, however, would still not amount to a living wage in Washington, D.C., according to a Massachusetts Institute of Technology living wage calculator.

A report by Issue One, a political reform group that calls itself “crosspartisan,” found one in eight congressional staff members are not paid a liveable wage for Washington, D.C. A 2021 House Compensation and Diversity Study found the median annual earnings for all house staff members is $59,000 and for member offices, staff members earned a median of $50,000 a year.

Traditionally, entry-level staff on capitol hill work long hours and frequently make less money than their peers who work in similar roles in the private sector. Many often leave government work after several years of public service for more compensation outside of government.

A survey distributed by the Congressional Progressive Staff Association found 90% of nonmanagement staff members who participated in the study reported working weeknights after 6:30 p.m. and/or on weekends.

White House announces over $8 billion in hunger and nutrition commitments