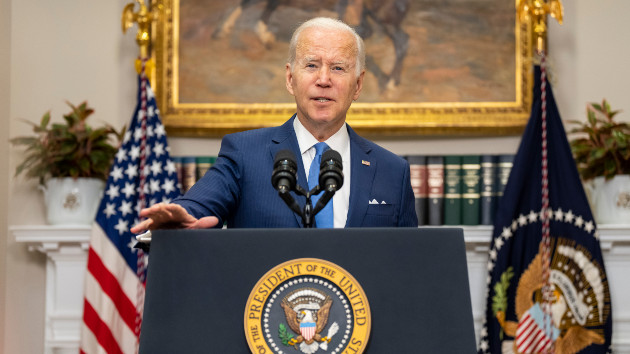 (WASHINGTON) — If the Supreme Court upends nearly 50 years of abortion rights as expected, all eyes will be on the White House and a liberal president who has vowed to fight to keep abortion access.

But what can he do, really?

In recent weeks, dozens of abortion advocacy groups, lawyers, providers and lawmakers have huddled to pitch ideas that range from from what advocates call creative to the seemingly far-fetched. The White House has met with many of these officials in recent weeks to hear them out, although it remains tight-lipped on where its legal strategy might be headed.

Could the government lease federal buildings and public lands to abortion clinics? Declare a public health emergency, and offer disaster relief money or health care grants to states anticipating an influx of patients?

What about federal travel vouchers for patients seeking health care in abortion-friendly states, or relaxed import rules for abortion pills made overseas? President Joe Biden, some argue, also could say that banning abortion pills by mail — as some states are trying to do — violates rules on interstate commerce.

“We are all thinking creatively about what administrative solutions might exist,” including increasing the availability of abortion pills, said Kimberly Inez McGuire, executive director of Unite for Reproductive & Gender Equity who met with the White House in one of its “listening sessions.”

“But in this specific moment, what I’m looking for from this administration is leadership,” she said.

Complicating much of the issue for the Biden administration are decades-long restrictions on federal spending legislation that prohibits the executive branch from spending money on most abortion services. That prohibition is unlikely to change so long as the Senate remains narrowly divided between Democrats and Republicans.

Still, abortion rights advocates say every idea is on the table. Under Biden’s control, they argue, are powerful institutions, including the Food and Drug Administration, which has approved access to the abortion pill by mail, and Medicaid, the government’s insurance program for low-income families.

That means post-Roe, the United States will likely spend years embroiled in legal battles over abortion, as conservative states bump up against the power of the presidency.

Biden “can’t reverse the Supreme Court with an executive order,” said David Cohen, a professor of law at the Drexel Kline School of Law, who has written in favor of fighting abortion restrictions.

“But there are things that he can do, and ways that he can harness the federal government to increase access, even if some states are trying to limit it,” Cohen said.

Biden hinted as much in an interview last week with ABC’s Jimmy Kimmel Live!

“I think what we’re going to have to do is that there are some executive orders I could employ, we believe. We’re looking at that right now,” Biden said.

Legal experts predict that much of Biden’s strategy will likely focus on the idea of “federal preemption” — the idea rooted in the Constitution that federal law always wins out over state laws.

For example, it’s possible that Biden might argue that states can’t lawfully restrict access to the abortion pill mifepristone because the FDA has already approved its use for all Americans, Cohen said.

Under Biden, the FDA also has determined that the drug is safe enough to prescribe through a telehealth appointment and mail to the patient, even as 19 states restrict the drug to being dispensed in-person.

That decision to allow access to the abortion pill, Cohen argues, “is rooted in federal law because the agency only exists and only has the authorization to authorize a person because of federal law.”

The idea of FDA policy outweighing state restrictions is currently being tested in court. GenBioPro, the manufacturer of generic mifepristone, is challenging Mississippi’s restrictions on the drug as being at odds with federal rules, with a decision expected this summer.

Advocacy lawyers also expect that Biden is working on the idea of expanding access to mifepristone, possibly by easing import restrictions on overseas providers. The drug is widely available in states that don’t restrict abortion, although international organizations like Aid Access have been mailing the drug to any U.S. resident even if a state prohibits it and despite objections by the FDA.

Another focus by Biden could be on Medicaid, the largest insurance payer of pregnancy-related services.

While federal money can’t be used for most abortion services, Medicaid — which the federal government jointly operates with states — is required to pay for abortion care in cases of rape, incest and if a physician certifies the pregnancy would put the patient’s life at risk.

Compliance among states with these rules has been uneven historically, and several conservative legislatures are pursuing laws with stricter exceptions. In Oklahoma, for example, the law only allows abortion in cases of rape and incest if it’s reported to the police, and to save the life of a mother “in a medical emergency.”

John Yoo, a former top legal adviser to the Bush administration, said he thinks the most consequential step Biden could probably take is leveraging his power over Medicaid and Medicare, as well as the federal health care exchanges governed by the Affordable Care Act. For example, Biden could require that insurers cover abortion services, at least in states where it’s legal.

“I don’t think those (steps) could pre-empt state laws that make it criminal to carry out abortion, but would provide federal support once (a person) could get to a state where abortion was legal,” said Yoo, a law professor at the University of California, Berkley.

Still, Yoo said he thinks Congress would have to lift its restrictions on federal spending on abortion — a provision known as the Hyde amendment — to make that happen.

Democratic lawmakers and advocacy groups say what matters most is that Biden is as aggressive as possible.

In a letter to the president, more than two dozen Democrats, including Sens. Patty Murray of Washington and Elizabeth Warren of Massachusetts, called on Biden to invoke his “unique power to marshal the resources of the entire federal government to respond.”

URGE’s Inez McGuire said even symbolic statements by the president can make a difference.