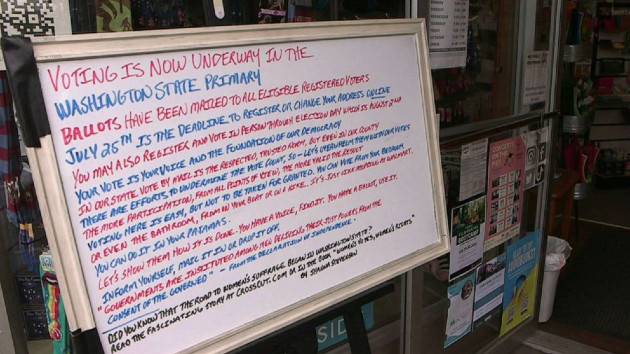 (WASHINGTON) — Clallam County, Washington, may not be a location that’s been in the spotlight, but the area, located in the northwestern section of the state, carries a one-of-a-kind distinction in the political world.

Since 1980, Clallam has been the only county in the nation that has voted for the winning candidate in every presidential election.

Some residents and elected officials told ABC News that they not only think their town will continue the trend in the next presidential election, but also be a bellwether for this year’s midterm elections.

And while those residents cannot fully predict if their town or the nation will be shifting toward one political side or the other, many there hope other parts of the country can emulate their efforts to overcome differences and work together.

ABC News visited the county shortly after Joe Biden won the presidential election in 2020 and spoke with voters who went Democrat on the ballot.

When asked about 2024 predictions, Alan Turner, who owns a bookstore in the county and is a registered Independent, told ABC News that he has concerns about Biden and his party and fears a red wave is coming.

“I don’t think young people are going to come out for him,” Turner, who is a self-described “Democratic socialist,” told ABC News last month. “His rhetoric and his delivery don’t seem to match the significance of the moment.”

Young Johnson, a restaurant owner who voted for Barack Obama twice and then Donald Trump, told ABC News last month that Biden shouldn’t run again in 2024 and that she thinks sentiment is going to fuel a “red wave” this fall. Johnson said the economy is the top issue on her mind, because of the hardships her business has faced recently.

“We’ve had to simplify things because of labor as well as the product,” she told ABC News.

Clallam County’s leaders told ABC News that those issues resonate with constituents of all political backgrounds.

“Increases in the cost of gasoline cause people to stand back and say, ‘Well, do I really need that?’ And, in some cases, it’s a real heartbreak,” Peach told ABC News.

Despite the economic woes and changing political temperature, some Clallam County leaders said they have worked hard to make sure that the community remains civil during the season.

In 2020, the independent community of Sequim was shocked after its mayor, William Armacost, shared baseless QAnon conspiracies on a local radio show. He did not apologize or take back his comments.

That spurred the creation of the “Sequim Good Governance League,” in 2021 to support “transparency, reasoned dialogue and respect for individuals within the city administration.”

The group endorsed candidates for the 2021 city elections including Democrat Vicki Lowe for and Republican Brandon Janisse.

“I would knock on doors and I would say, ‘Hi, my name’s Vicki, I’m running for Sequim City Council.’ And they’d say, ‘I know who you are. Can you get rid of the mayor?’ Literally, that’s what people said,” Lowe told ABC News.

Sequim’s government is run in a Council-Manager form where the mayor is chosen by the council members.

Lowe and Janisse both went on to win their Council seats, along with three other Sequim Good Governance League-backed candidates. Armacost was voted out of his mayoral role by the council in January and was the only councilor to vote in favor of himself, according to city records.

Lowe and Janisse, who was chosen by the Council to serve as the city’s the deputy mayor, told ABC News that even though they may not see eye to eye on policies, they have made it their mission to restore civility and reason to city leadership.

“You got to be an adult,” Janisse told ABC News. “[Vicki and I] and aren’t going to agree with everything and everything, but no ill will toward her because it serves no purpose.”

And as the country watches how Clallam County will vote this November and in 2024, its leaders say they hope Americans can also take a page from their efforts and camaraderie despite the political differences.

“If that ends up having some carryover into the way that people think beyond their local elections, then I would think that that would be good,” Ozias said.