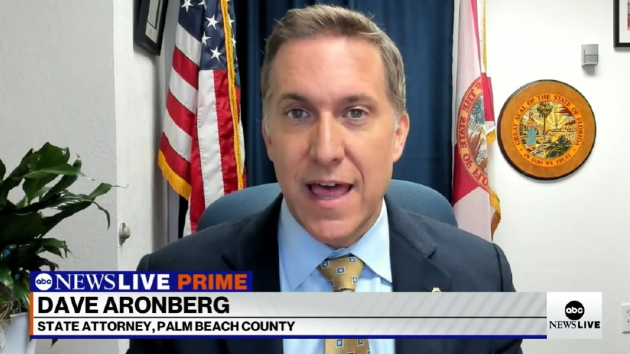 (NEW YORK) — Federal prosecutors requested on Thursday a stay, attempting to block Judge Aileen Cannon’s prior ruling preventing the FBI and Department of Justice from continuing its review of classified documents in connection with its criminal investigation into Trump’s handling of documents seized at former President Donald Trump’s Mar-a-Lago estate.

Prosecutors said there was risk of “irreparable harm” to national security and the ongoing investigation if the stay was not granted.

Trump’s legal team responded on Monday, saying that appointing a special master to review the documents is a “sensible preliminary step toward restoring order from chaos,” and urged Cannon to reject the request for a stay.

PRIME: Dave Aronberg, a state attorney in Palm Beach County, thank you so much for joining us. The Justice Department was fairly aggressive in taking on the arguments in Judge Cannon’s prior ruling. How effective of a case do you think that the DOJ made in calling for a stay that would let them keep reviewing the classified records at the heart of this case?

ARONBERG: I think it was their only choice because if they don’t get this partial stay, then it jeopardizes our national security because what Judge Cannon did was really inconsistent. She said, ‘Hey, FBI and DOJ, you cannot use and review those documents you seize from Mar-a-Lago while the special master review is pending. But at the same time, intelligence community, you can continue with your review to make sure these documents didn’t damage national security by the fact that they’re being kept in a Palm Beach social club.’

It doesn’t make sense because the FBI is part of the intelligence community review of those documents. I mean, the CIA is not a domestic law enforcement agency. The intelligence community depends on the FBI. So I think what the DOJ is doing on this motion is to give the judge a way out, a chance to redeem herself before she gets overturned on appeal.

PRIME: Do you think she will redeem herself?

ARONBERG: I think she will. If you saw her comment recently, it was, ‘hey, Trump’s attorneys, what do you make of this motion?’ It seemed like she was sort of hedging her bets by saying, ‘can you speak to the fact that the DOJ is asking for a partial stay?’

And remember, this is just to allow DOJ to review the 100-plus classified documents, not all the documents, just the 100-plus documents that are classified so, of course, they’re not subject to attorney-client privilege because they’re the government’s documents. They involve national security. It’s not communications between Trump and his own personal lawyer and executive privilege doesn’t apply here.

So I think that the judge is starting to get some buyer’s remorse of her original decision, and I think she’s going to step away from it just a little bit and grant this motion.

PRIME: And just to kind of follow that a little further, they cited the risk of potential, irreparable harm to national security and the ongoing investigation if they can’t continue reviewing the documents and say that Trump has no claim to them. Is the judge likely to be swayed by that argument, given her prior ruling allowing for a special master?

ARONBERG: I hope so, because it’s a really powerful argument. I mean, you’ve got to be able to review these documents, especially now that we’ve heard they involve nuclear secrets. I mean, how do you tell the government ‘put it on hold, don’t review them, don’t use them in any way, and we’ll have the special master that can go on and on and on?’

I mean, there are lives at risk. You have human intelligence sources that have their lives at risk because this information could be floating out there. And so, yeah, I think the argument is definitely on DOJ’s side. The problem is you’ve got a judge in Judge Cannon who has shown that she’s willing to go Donald Trump’s way, the person who appointed her to the bench, the person who sought her out at a courthouse 68 miles from here in West Palm Beach, over in Fort Pierce, where she’s the only judge assigned to that courthouse.

They wanted her on this case because they knew she was a Trump appointee and they thought she would do their bidding. And so far, hey, their faith in her has been rewarded.

PRIME: Palm Beach County state attorney Dave Aronberg. We thank you so much.

ARONBERG: Thanks for having me.