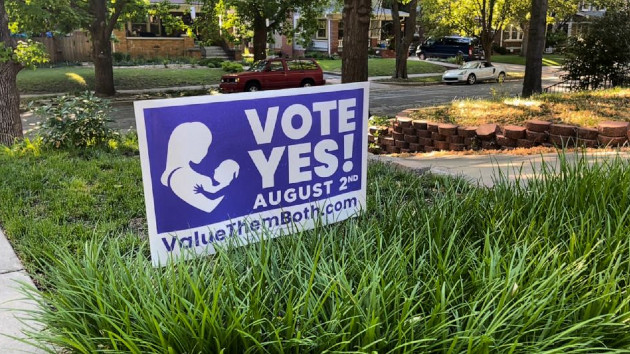 (WICHITA, Kan.) — On Tuesday, for the first time since the Supreme Court overturned Roe v. Wade, voters will weigh in directly on abortion in what both sides call a bellwether for the issue in post-Roe America.

Kansas primary election ballots include a proposal to amend the state constitution to explicitly disavow the right to access abortion. It will be the first popular vote on abortion rights in nearly 50 years. In reversing Roe in June, the Supreme Court ruled that abortion should be left to individual states.

“This amendment vote is actually saying: Do we want abortion restrictions greater than we have? Or we’re okay with abortion rights,” said Russell Arben Fox, a professor of political science at Friends University, where he studies Kansas politics.

Polls show that most Kansans, like most Americans, support some restrictions on abortion services; but majorities also feel strongly that the procedure should not be completely banned.

“This is a vote in a Republican state that’s going to see whether or not that majority can still make its voice be heard. If not, that’s a lesson to other states,” Fox said. Analysis by FiveThirtyEight has found the vote will likely be very close.

The so-called “Value Them Both” amendment proposal reads, in part: “Because Kansans value both women and children, the constitution of the state of Kansas does not require government funding of abortion and does not create or secure a right to abortion.”

A “yes” vote to approve the amendment would effectively override a 2019 state Supreme Court ruling which said the state constitution protects abortion access under a right to personal autonomy. It would clear the way for GOP super-majorities in the Kansas legislature to enact more stringent abortion restrictions — if not a total ban — in keeping with a pattern of such laws in red states nationwide.

A “no” vote would keep the status quo, the amendment’s opponents say, preserving Kansas as an abortion rights refuge in a region where bans on the procedure have proliferated.

“We are simply returning the question of abortion back to the people of Kansas,” said Brittany Jones, director of policy and engagement at Kansas Family Voice, an advocacy group backing the amendment. “It is absolutely not a ban on abortion. It’s all about protecting our more than 20-plus regulations that actually are saving lives and helping moms and babies.”

Kansas currently allows abortions up to 20 weeks after fertilization but requires patients to undergo counseling and a 24-hour waiting period; provide parental consent in cases of a minor; and obtain an ultrasound.

While several neighboring states outlawed abortions after Roe was nullified, Kansas is one of eight states that have state constitutional protection for abortion under a prior state court ruling and were unaffected by the U.S. Supreme Court’s decision.

Its four active abortion clinics performed more than 8,100 abortions in 2020, according to the Guttmacher Institute, an abortion rights advocacy group.

“Why this vote is so important is that it’s an infringement on folks’ constitutional rights,” said Dr. Christina Bourne, medical director of the Trust Women clinic in Wichita. “Abortion is a canary in [the] coal mine situation. If we lose access to Kansas, then we lose access to being able to take care of a lot of people in the Midwest and the South.”

Republican-led legislatures in five other states — Louisiana, Kentucky, Pennsylvania, Tennessee and West Virginia — have advanced similar efforts to amend their constitutions to restrict abortion rights. A proposed amendment in Kentucky will appear on the ballot in November.

Ahead of the Kansas vote, both sides in the abortion debate have mobilized multi-million dollar organizing and advertising campaigns unlike any America has seen on the issue in a generation.

Susan B. Anthony Pro-Life America, the national political arm of the anti-abortion movement, says it’s investing at least $1.3 million in the Kansas campaign and has deployed an army of student canvassers visiting more than a quarter-million homes to promote the amendment.

“This is probably the biggest election I’ve ever seen in my lifetime — this tiny little primary,” said Sedgwick County Commissioner Lacey Cruse, who supports abortion rights and opposes the amendment.

It is unusual for a ballot measure as significant as amending the state constitution to be included in a summer primary — rather than the fall general election — when voter turnout tends to be low in Kansas, historically around 20%. Opponents of the amendment argue the timing was deliberate. (The amendment’s proponents insist it’s coincidental.)

“I think it’s kind of predatory the way that they’re putting this up for ballot because this is typically when you just vote for your party, not going and voting for a huge decision like this,” said Emily Becker, a Wichita resident who supports abortion access.

ABC News joined canvassers on both sides of the issue as they went door-to-door across Wichita in sweltering heat several weeks before the vote.

“Abortion is the killing of an unborn baby,” said Jennifer Hickerson, a devout Catholic grandmother who called the vote a critical step toward a total abortion ban. “What will happen then is that our legislators, our elected officials — elected by the people — will be able to enact laws regulating [abortion]” if the amendment passes.

Susan Osborne, who is also a Catholic grandmother, has been urging neighbors to vote against the measure, calling it an infringement on constitutional liberty.

“For my daughter, for my granddaughter,” Osborne said as she canvassed the Riverside neighborhood of Wichita. “[Women are] angry about Roe v. Wade and they’re angry that Kansas has this constitutional amendment coming up.”

Outside the Trust Women clinic, ABC News spoke with Adrian, an Oklahoma mother of two who asked not to have her full name used to protect her privacy. Adrian called Kansas a beacon of hope at a time when reproductive health services where she lives have become harder to obtain. Oklahoma is one of 13 states that have ceased nearly all abortions.

After receiving one of the last legal abortions in Oklahoma last month, Adrian drove to Wichita worried that the procedure wasn’t successful. She is still testing as “pregnant,” she told ABC News.

“It’s just really disheartening that I can’t do something like this and in my hometown — that I have to travel,” she said of her trip to Wichita seeking an ultrasound. “I had my own inhibitions about abortions. But you know, life experiences happen and the decisions you make are ones that you will make and live with. So for me, I just feel like women should have the ability to be trusted more and their decisions on what they do for themselves.”

Advocates for and against the Kansas amendment agreed that the U.S. Supreme Court’s decision overturning Roe has energized and engaged voters for what would have been an otherwise sleepy summer election.

“I think it sends a message to the rest of the United States to stand up. Speak out. Stay strong,” said Osborne, one of the locals who supports abortion access.

Turnout is expected to be the deciding factor in the constitutional amendment’s fate.

Hickerson, another local, hopes to see it pass: “I’m confident that God’s will will be done.”