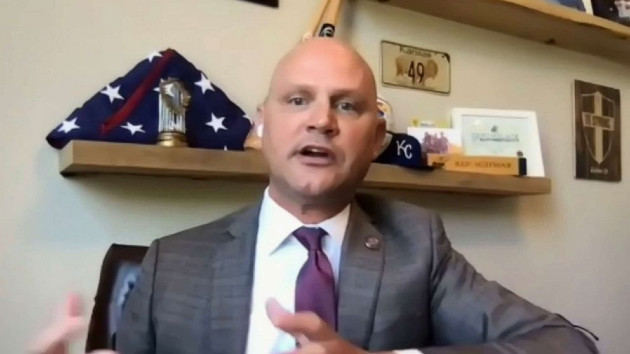 Voters on Tuesday will decide on a proposal to amend the state constitution to explicitly disavow the right to access abortion. It will be the first popular vote on abortion rights in nearly 50 years.

Below is a transcript of Schwab’s interview with ABC News’ Kyra Phillips:

ABC NEWS LIVE: Well, clearly, it’s a huge vote tomorrow on abortion in your state. Your office estimates that this issue alone could actually bring in an extra 200,000 voters to the polls. Kansas is a red state, of course. So tell me, why is this issue in particular energizing voters there and is that good for Republicans right now?

SCOTT SCHWAB: Well, I think it’s good for our republic to get voters energized. But this is a big issue because we’ve always seemed to be at the center in Kansas on these big social issues, whether it’s slavery, women’s suffrage, prohibition [or] the Civil Rights Act. What’s interesting about this is the Supreme Court of Kansas said there’s an inherent right to an abortion in the Kansas Constitution, and the word does not even exist in the Constitution. But it kind of edges the legislature out from making policy. So this has created the big debate on how much regulation — and should there be regulation — on abortions in our state.

ABC NEWS LIVE: Which leads me to my next question. You know, if abortion remains legal in Kansas, is that the end of the legal fight or will Republicans pursue further restrictions on abortion going forward?

SCHWAB: Well, if the measure passes, it’s very difficult for the legislature to regulate anything as it relates to abortion. I’m no longer a policymaker in the House, even though I had been at a time. We will always have those debates on abortion and some measures will pass, some won’t.

But really, I can see after this, because this has been such a topic of an issue, this constitutional amendment, that the legislature might want to sit back and just take a breath if it passes. Because we have had a whole lot of good laws on the books that aren’t in effect because that Supreme Court ruling and it’ll just be like what we had six, seven years ago. I think a lot of legislators in our state will just kind of want to take a break, but that’s just my prediction.

SCHWAB: We’ll take a break in…not deal with this issue this year. Let’s deal with some other issues that have taken a back-burner, because these social issues have really taken a lot of the legislature’s bandwidth. So there’s a lot of things like K through 12 funding and highway funding and rainy day fund. So I really think the legislature will probably want to focus on this next upcoming session. But I could be wrong. The legislature is an independent body.

ABC NEWS LIVE: Well, and think about all the political pressure. I mean, you really think abortion would take a back seat?

SCHWAB: Actually, they tried to pass this amendment to go to the vote of the people two years ago. And it didn’t pass. It didn’t, it didn’t have the votes to go there. So, yes, sometimes it does.

ABC NEWS LIVE: All right. Let’s talk voter confidence, shall we? Since we’re talking about that, you’re in a pretty tight primary yourself. Your opponent, former County Commissioner Mike Brown, has echoed Donald Trump’s lies about election fraud. He’s made election security central to his campaign against you. What’s your response to those lies about the 2020 election? Where do you stand?

SCHWAB: Well, you know, it is frustrating because he was a county commissioner at the time and he certified his own loss in that election and trusted enough to do that and that all of a sudden the turn. But, President Trump is not complaining about Kansas and we do post-election audits. We’ve done over 300 post-election audits in Kansas since we took office in 2019. And one, not one county has failed their audit. And we’re unique in that that we do post-election audits in a way that they are finished before the board of canvassers meet to show those board of canvassers an error did not occur. And every county has voter paper ballot verification that gets counted. So it’s pretty, it’s pretty hard to cheat.

ABC NEWS LIVE: But if you just look at the past couple of years. Can you win as a Republican if you reject the former president’s false claims about the election? We see the power that Trump still holds within the GOP. What do you say to those in your party who do continue to peddle the “big lie” because it’s still happening?

SCHWAB: It is interesting. I had a friend [who told] me saying, “It’s interesting the people who believe conspiracy theories about somebody trying to control them are allowing themselves to be controlled by the very people spreading the conspiracy theory.” The complaint in Kansas isn’t valid.

And that’s where we put our focus…

I don’t judge other states because I would have to go there and audit them. And I don’t have time to do that because I’m paid to do [that] here in Kansas and in Kansas we get it right. And it’s just the outside voices coming into our state, making false attacks and assumptions that the law itself prevents from happening.

ABC NEWS LIVE: Before we let you go, Scott, I’ve got to ask about one of the stories making news. Of course, locally, your office is refusing to turn over provisional ballot records ahead of voting tomorrow, despite a court ruling that says you violated the state’s open records law. You know, the governor there in Kansas has urged you and your office to comply with the ruling. You’re running as the candidate with integrity and challenge your opponent over his 2020 election lies. How can you claim that while ignoring this court order?

SCHWAB: Well, we can’t do the court order. It requires a software upgrade that we can’t do right now. And we will be appealing that to the Kansas Supreme Court because a lower court agreed with us. What it is, is it’s partial information in that report, and we’re constantly trying to fight partial and misinformation and that appellate courts change Kansas law, as opposed to the open records being, “Hey, if there’s a record, you’ve got to make it open.” The appellate court says you got to create the record. Well, that’s something completely different that we’ve never had to deal with before.