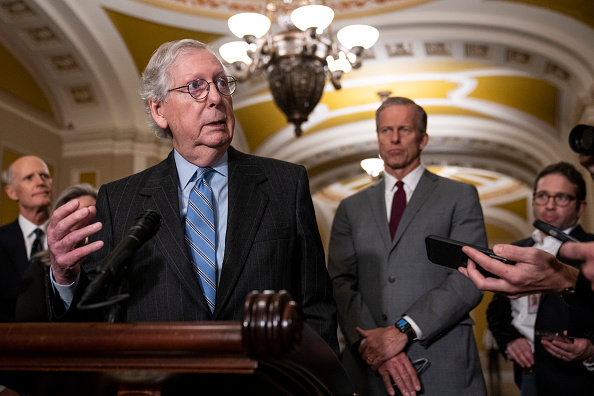 “I don’t think anybody should be spending any time with Nick Fuentes,” McCarthy told ABC News Chief White House Correspondent Mary Bruce after meeting with President Joe Biden and other congressional leaders.

“He has no place in this Republican Party. I think President Trump came out four times and condemned him and didn’t know who he was,” McCarthy said, although there is no evidence Trump condemned Fuentes.

Senate Republican Leader Mitch McConnell on Tuesday went further than McCarthy, condemning Trump’s meeting with Fuentes, opening his weekly press conference by rejecting not only “antisemitism” and “white supremacy” but saying Trump’s association with the ideologies could keep him from winning a second term in the White House.

“There is no room in the Republican Party for antisemitism or white supremacy,” McConnell said, flanked by Republican Senate leadership. “And anyone meeting with people advocating that point of view, in my judgment, are highly unlikely to ever be elected president of the United States.”

McCarthy is a legislative ally of Trump’s while McConnell has broken with the former president a number of times, including criticizing him over the Jan. 6 insurrection. The GOP leaders’ comments came after a number of other high-profile Republicans condemned what Trump has insisted was an impromptu meal.

“President Trump was wrong to give a white nationalist, an antisemite and a Holocaust denier a seat at the table, and I think he should apologize,” Pence told NewsNation in an interview.

Trump has said he did not know who Fuentes was when Fuentes came to Mar-a-Lago, initially posting about the meeting on his social media platform on Friday, claiming he didn’t know Ye would be bringing other guests, but not mentioning Fuentes.

In later statements, he said that he only sought to meet with Ye and that the rapper brought Fuentes to the two-hour dinner without his knowledge.

“Well, I condemn this ideology. It has no place in society,” McCarthy said, when pressed by ABC’s Bruce about Trump’s lack of comment on the white nationalist Fuentes.

Asked later if it was appropriate for or Trump to meet with West, McCarthy said “the president has meetings with who he wants. I don’t think anybody, though, should have a meeting with Nick Fuentes … I think Kanye West…I don’t think we should associate with them, as well. I’m very clear in my position.”

McCarthy last week clinched the Republican nomination for speaker in the next Congress, fending off a challenge from Arizona Rep. Andy Biggs as the GOP will regain the House majority next session.