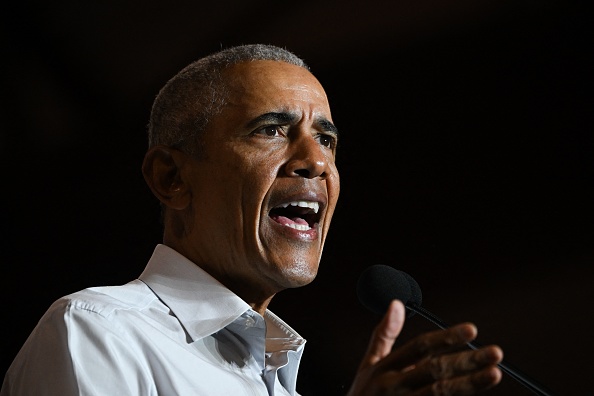 (LAVEEN VILLAGE, Ariz.) — Former President Barack Obama continued his crisscrossing of midterm election battlegrounds Wednesday in Arizona — hoping to turn out voters so Democrats can hold the Senate and keep election deniers out of office.

“Our democracy is on the ballot, and nowhere is that clearer than here in Arizona,” Obama said.

A crowd of thousands, of all ages and races, packed inside Cesar Chavez High School in Laveen Village, held up their phones and stomped their feet as the former president delivered a roast and a warning on what he called the Republican “cast of characters” on the ballot in Arizona.

“They have decided it’s advantageous for them to just assert that Donald Trump won the last election, and now they want control over the next election. And their argument has no basis in reality,” Obama said. “If you’ve got an election denier serving as your governor, as your senator, as your secretary of state, as your attorney general, then democracy, as we know it, may not survive in Arizona.”

To shore up support, especially for incumbent Sen. Mark Kelly and Secretary of State Katie Hobbs, the Democratic nominee for governor, Obama tailored his attack lines to their opponents, Republicans Kari Lake and Blake Masters. Both have former President Donald Trump’s endorsement and have echoed his election denialism.

“Why would you vote for somebody who you know is not telling the truth about something? I mean, on something that important. I don’t care how nicely they say it. I don’t care how poised they are or how well-lit they are,” Obama said, referring to Lake’s TV appearances.

For more from ABC News’ team of reporters embedded in battleground states, watch “Power Trip” on Hulu, with new episodes on Sunday.

Back in May 2016, when Obama was finishing his second term and Lake was still an anchor at a FOX affiliate in Phoenix, Lake interviewed him in Arizona where they discussed Senate Republicans blocking now-Attorney General Merrick Garland’s nomination to the Supreme Court. “Democracy only works when people play by the rules, where everybody is fair,” Obama told her at the time.

The former president said Wednesday he doesn’t remember thinking then that “she was the kind of person” to push conspiracies.

“I guess that stuff came later because she found it convenient — because she thought, ‘Well, here’s an opportunity to get attention,"” Obama said. “Listen, if we hadn’t just elected somebody whose main qualification was being on TV, you can say, ‘Maybe give it a shot. What’s the worst that could happen?’ Well, now we know. It doesn’t just work out just because somebody’s been on TV. Turns out, being president or governor is about more than snappy lines and good lighting.”

Notably, Lake contributed to Obama’s first presidential campaign and voted for him, but attributes that now to dissatisfaction with the Republican establishment.

“Katie, she may not be flashy,” Obama said of Hobbs before an outspoken attendee disagreed. “She could have been. She just chooses not to be, because she’s serious about her work.”

Hobbs, who has faced criticism for refusing to debate Lake, has run a low-key campaign when compared to her competitor’s large-scale rallies and moderated Q&A events. But Wednesday, she took a jab at Lake in front of her largest audience yet.

“Kari Lake is playing to an audience of one. I promise you if she’s elected, she’ll spend more time traveling to Mar-a-Lago than to Mesa,” Giles said. “Likewise, Blake Masters wants to go to the Senate to represent two people: One, a billionaire in California, the other, a want-to-be billionaire former president in Florida,” he added, referring also to Peter Thiel, a Masters-mega donor.

For his part, Obama said of Masters, “If you were trying to create, in a lab, a wacky Republican politician, it’d look a lot like this guy.”

The former president also knocked the 36-year-old conservative and venture capitalist for scrubbing his website after his primary win to soften some of his stances.

“His website had all kinds of lies about how the election was stolen, then after he won the nomination, poof, vanished. Along with his extreme views on abortion, poof,” Obama said. “I mean, this guy is supposed to know tech. Does he think like people can’t track that?”

Arizona Republicans, meanwhile, were quick to dismiss Obama’s visit and note that he never carried Arizona.

“Barack Obama has never won Arizona, and the fact that he is here is a testament to the toxicity of Joe Biden that has rubbed off on Mark Kelly and Katie Hobbs,” Republican National Committee spokesperson Ben Petersen said in a statement. “This election is a referendum on Biden’s abject failure on skyrocketing inflation, open borders and violent crime.”

Masters also brushed off the former president’s criticism of him and has dismissed any notion of a post-primary pivot, likening his website changes to a run-of-the-mill update. He responded by posting a family photo to Twitter, with his wife and three small sons, and saying, “This is what Democrats like Obama think is wacky.”

Lake, meanwhile, has countered characterizations of her election denialism to say Democrats have also not conceded elections and have raised doubts in results dating back to 2000.

President Joe Biden, notably, has not visited the Grand Canyon State and has not announced plans to do so, focusing instead on Florida, Maryland, New Mexico and California. But the White House announced Thursday plans for first lady Jill Biden to campaign with Kelly in Phoenix this weekend, the final weekend before Election Day.

At the same time, Biden, Trump and Obama will all be in Pennsylvania on Saturday, a state that has seen razor-thin margins in another Senate race that could determine the balance of power in Congress.

While Obama’s appearance could be seen as coming too late since a majority of Arizonans vote early, and early voting ends Friday, voters outside the rally in South Phoenix predicted he’s the one to bring more people to the polls.

“I’m hoping he can energize us,” Ann Wood of Phoenix told ABC News. “I think every single vote counts. It was so close last time, and I just hope it makes a difference.”

Libby Cathey is one of seven ABC News campaign reporters embedded in battleground states across the country. Watch all the twists and turns of covering the midterm elections every Sunday on Hulu’s “Power Trip” with ABC’s George Stephanopoulos.