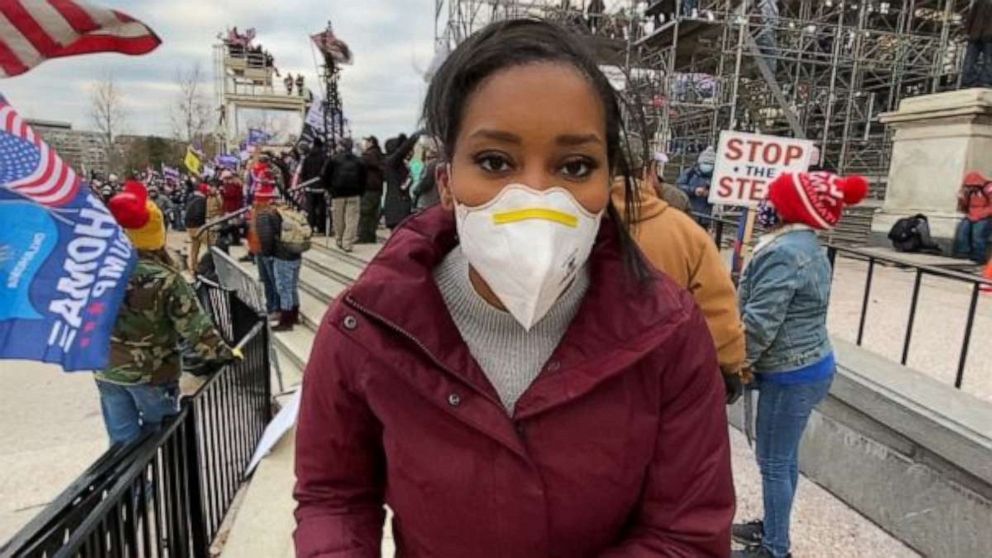 (WASHINGTON) — It was hardly the first week any of us imagined: A violent mob storming the United States Capitol, chanting for the vice president to be hanged, leaving behind a trail of shattered glass, blood and debris. The first 100 hours on the job were filled with chaos, confusion and a new set of challenges.

For most freshman lawmakers, the Jan. 6 attack meant running for safety in a building they hardly knew. For me, as ABC’s incoming congressional correspondent, it meant covering a historic and deadly insurrection as one of my first assignments on the beat.

Third day on the job: ‘Oh, is this your first coup?’

Just three days after being sworn into office, the freshman class of lawmakers found themselves hiding for cover. “It was a day of terror,” Democratic Rep. Jamaal Bowman said. “I remember feeling numb and in shock.”

Democratic Rep. Mondaire Jones was down on the House floor as the mob of Trump supporters closed in on the chamber. Members were instructed to grab escape hoods — emergency gas masks — and swiftly move to a secure location.

“Oh, is this your first coup?” Jones recalled another member mentioning to him in jest once they reached a secure location.

The U.S. Capitol is well over 1.5 million square feet with 600 rooms, underground tunnels and corridors that stretch miles. It’s hardly a building you can learn your way around in a few days — let alone during an insurrection. “You don’t have a sense of direction because you’re only three days on the job,” Bowman said. “I definitely didn’t know where the cafeteria was or the most efficient way to get into the Capitol.”

For Bowman, the chaos that unfolded that day would define the weeks and months that followed; and when I asked if he still feels the weight of Jan. 6 one year later, his answer was definitive. “As you were asking the question, I felt the tension in my neck and shoulders,” he said. “Yes, every single day I feel it. Every day I walk out of my house, I feel it.”

The unwatchable video: ‘It brought me to my knees’

If there was a “honeymoon phase” for the freshman class, it didn’t last long. Their first three Wednesdays in office would be unlike any others in American history: an insurrection, an inauguration and an impeachment. The Capitol became a fortress with miles-long fencing wrapped around the complex, military vehicles guarding the streets and an armed National Guard standing at the ready.

For weeks, many lawmakers had no idea how close they had come to the violent mob — but that all changed during the impeachment trial of former President Donald Trump. The never-before-seen video of the attack was raw and graphic. It sent shockwaves throughout the Capitol.

For Republican Rep. Nancy Mace, much of it was unwatchable. “I couldn’t get through the video that the Democrats put together for impeachment, I got through about half of it. I could not watch it. It made me physically ill, it made me sick to my stomach, it brought me to my knees,” Mace told me, weeks after the insurrection.

During our interview, I nodded silently. The images were searing and still keeping me up at night. I remembered the moment things took an even more dramatic turn during the insurrection, when there were reports of gunfire inside the Capitol. Before we knew it, paramedics raced past our team, rushing a woman out on a gurney. Blood covered her face and gushed down her body. Her eyes were barely open, and as they carried her away, she stared back at the building she breached.

Almost every day, I enter through the building’s doors, perhaps one of the things I’ve struggled with most is not having any memories of the Capitol prior to Jan. 6. Most things I pass every day — windows, entrances, plazas, cafeterias — trigger memories from that day.

Over the course of several hours, we watched as medics scrambled to triage bruised and bloody officers. In the months to come, I would personally come to learn the names, faces and stories behind those images.

More than 130 days after the Capitol siege, the National Guard ended their mission. Their presence became unusually “normal,” and now, at times, I still find myself looking around for them.

One year removed: The day that changed Congress

One year after the Jan. 6 insurrection, the Capitol is still reeling from the violence. The attack only deepened fraught political divides, eroding trust between members who were caught in the crosshairs.

Freshman Republican Rep. Troy Nehls came face to face with rioters pounding on the door of the House chamber. “The door started shaking violently. And then the glass shattered. I saw a young man and he was looking at me and I was looking at him and he said, ‘You’re from Texas, you should be with us.’ And I told him this was ‘un-American, what you’re doing,” Nehls told ABC News.

Hours later, when the lawmakers returned to the chamber to certify the election results for President Joe Biden, Nehls was one of 147 Republicans who voted against it.

Tensions between parties have worsened. Shouting matches have erupted in the hall and deeply personal attacks have prompted members to relocate offices. Some Democrats have drawn a line — outright refusing to work with Republicans who voted against certifying the election. The House took rare action and issued a formal rebuke of a Republican who posted an animated video depicting him killing a fellow member of Congress and attacking the president.

Threats against lawmakers have peaked to record levels: 9,600 reported in 2021, according to Capitol Police. The number has more than doubled in the last four years. A year later, the lawmakers who stood shoulder to shoulder through the violence and chaos still can’t agree on how to define the events that occurred.