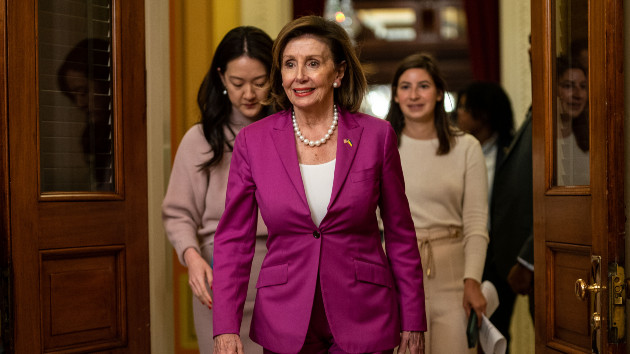 (WASHINGTON) — House Speaker Nancy Pelosi on Thursday will address her “future plans” in Democratic leadership, according to her spokesperson, a decision that will have a major impact on Democrats in their new position as House minority.

“Speaker Pelosi has been overwhelmed by calls from colleagues, friends and supporters. This evening, the Speaker monitored results in the three remaining critical states. The Speaker plans to address her future plans tomorrow to her colleagues. Stay tuned,” spokesperson Drew Hammill said in a statement to ABC News.

On Sunday — when a House majority had not yet been called — Pelosi would not say on ABC’s This Week with George Stephanopoulos if she would run for the role again, should Democrats remain in control.

“I’m not — right now, I’ve said I’m not making any comments until this election is finished, and we have a little more time to go,” she said, noting that she had no plans to leave Congress.

Pelosi has said the attack on her husband Paul would impact her decision to stay in House leadership post-midterms. Prior to the attack, several members have a called for a younger generation of Democratic leadership. The top three Democrats in the House are all in their eighties.

The news comes just hours following ABC News projections that Republicans had officially won majority control in the U.S. House, ending a four-year Democratic majority despite a strong midterm showing for the party.

“This year, House Democrats defied expectations with an excellent performance: running their races with courage, optimism and determination. In the next Congress, House Democrats will continue to play a leading role in supporting President Biden’s agenda — with strong leverage over a scant Republican majority,” Pelosi said on Wednesday in a memo.

Democrats may soon shake up primary calendar: Why it matters and who could replace Iowa