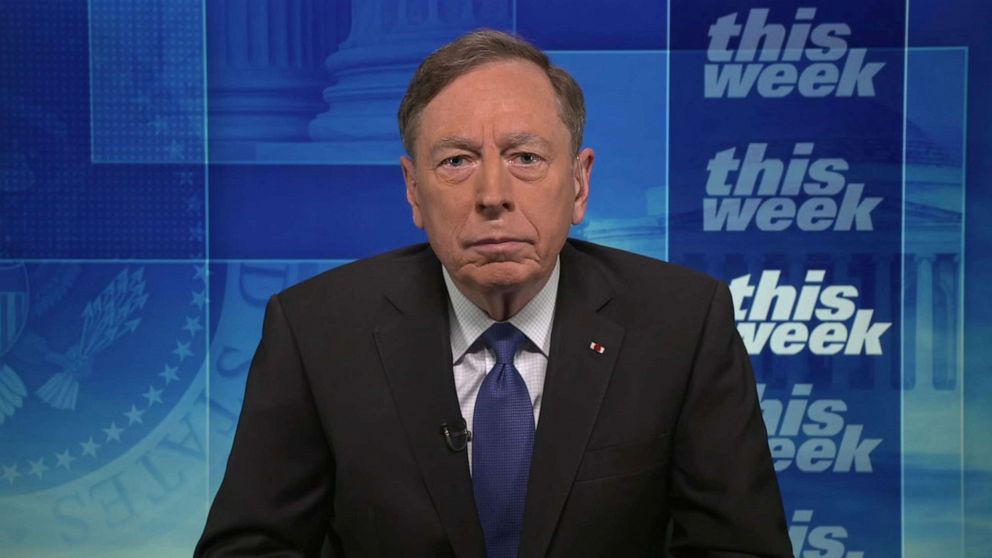 Putin “is losing” despite “significant” but “desperate” moves in the war that began in late February, Petraeus told ABC “This Week” co-anchor Jonathan Karl.

Regardless of Putin’s bravado, Petraeus said, “No amount of annexation, no amount of even veiled nuclear threats can get him out of this situation.”

Asked by Karl if Russia could win in its conflict with Ukraine, Petraeus said he did not see how: “They cannot. There is nothing he [Putin] can do at this point.”

On Friday, Putin said he was “forever” annexing four regions of Ukraine — a move denounced by Ukraine, the U.S. and other countries — and, in late September, the Russian leader said he was calling up some 300,000 reservists to bolster the war effort, triggering protests across his country.

In a rare acknowledgment Thursday, Putin admitted “mistakes” in how the mobilization was carried out. But he argued again in a speech Friday that the invasion was crucial to preserving Russia against what he described as “the enemy” in the West.

Meanwhile Ukrainian forces, buttressed by billions in weapons and funding from the U.S. and European allies, have made steady territorial gains since a counteroffensive that started last month.

“He’s going to continue to lose on the battlefield,” Petraeus said of Putin, pointing to Russia’s recent retreat from a supply hub city in one of the annexed regions. Mounting sanctions are another complication, Petraeus said.

Putin’s Friday speech, in which he announced the annexation of parts of Ukraine, was designed to undercut Europe’s commitment to challenging Russia, which is a major energy supplier on the continent, Petraeus said.

“Europe’s going to have a tough winter,” Petraeus said. “There’s going to be very reduced flow of natural gas, but they’ll get through it and I don’t think they’ll crack on the issue of support for Ukraine.”

“Negotiations, as President Zelenskyy has said, will be the ultimate end,” Petraeus said — though an imminent diplomatic outcome might be unlikely, as Zelenskyy signaled on Friday that Ukraine would only agree to talks “with another president of Russia.”

“It can still get worse for Putin and for Russia. And even the use of tactical nuclear weapons on the battlefield won’t change this at all,” Petraeus said.

Still, he said the nuclear threat must be taken “seriously.”

Karl asked him if the use of such weapons would require the U.S. to directly intervene in the conflict with NATO.

Petraeus said a response might see the U.S. and its NATO allies “take out every Russian conventional force that we can see and identify on the battlefield” in Ukraine, the contested region of Crimea that Russia annexed in 2014 and ships in the Black Sea.

“It cannot go unanswered. But it doesn’t expand — it’s not nuclear for nuclear. You don’t want to get into a nuclear escalation here,” Petraeus said. “But you have to show that this cannot be accepted in any way.”