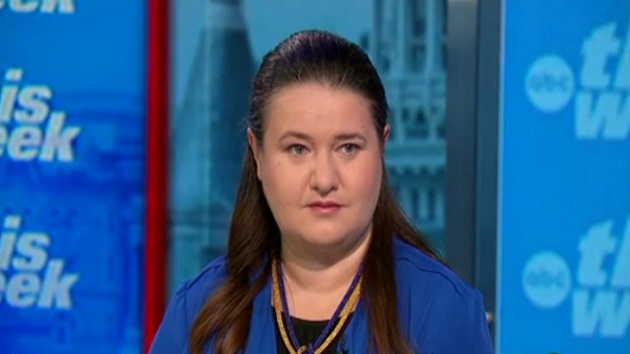 (NEW YORK) — As new evidence emerges of war crimes by the Russian military in its ongoing invasion of Ukraine, “It’s so important for everyone to see the true face of this aggression and terrorist attack Russia is waging,” Ukraine’s ambassador to the U.S., Oksana Markarova, said Sunday.

“It’s tortures, rapes, killings. War crimes of a massive proportions,” Markarova claimed in an interview with ABC “This Week” co-anchor Jonathan Karl. “That’s why we need to liberate the whole territory of Ukraine as soon as possible because clearly Russians are targeting all Ukrainians. Whole families. Children. So, there is no war logic in all of this. It’s simply terrorizing and committing genocide against Ukrainians.”

Ukrainian President Volodymyr Zelenskyy said in an address on Thursday that a mass grave was found in the recently recaptured territory of Izyum. Over 400 bodies could be buried in the site, according to Ukrainian officials. (Russia has repeatedly denied targeting civilians, despite evidence otherwise.)

“Do you have a handle in terms of those mass graves of who the victims are?” Karl asked Markarova on Sunday.

“We already have teams of investigators there,” she replied, adding that the country has been preparing national and international criminal cases against Russia — an effort the U.S. is assisting with, Markarova said.

“Some of them are families, like everyone in the family is killed for no reason,” she said, noting that “the majority of them … [showed] clear signs of torture.”

Karl noted the operation was undertaken “with a relatively small number of armed forces.”

“Do you have the manpower to hold this territory and to continue to push the Russians back?” he asked.

“In general, our force is much slower than Russian force. But the reason why they can’t hold the ground and we can retake it, and we will retake it, is because they are not only fighting with our brave president and our armed forces, they are fighting with all Ukrainians,” she said. “So all 40 million of Ukrainians are fighting for our loved ones and homes.”

“All of them were waiting for liberation,” she said.

The U.S. this week provided another $675 million in aid to Ukraine for ammunition, missiles and training. Since January, the U.S. has given some $13.5 billion in aid.

Russian President Vladimir Putin, meanwhile, says his army is regrouping in a war he has described as preserving his country’s security. The White House has publicly warned him against certain kinds of retaliation.

In an interview on CBS’ “60 Minutes,” President Joe Biden said that if Putin were to use chemical weapons against Ukraine, “You will change the face of war unlike anything since World War II.”

Citing that “stern warning” from Biden, Karl asked Markarova about the Ukrainian military push, saying, “What do you worry that Russia will do in response?”

“For all years that Putin is in power, they tried to scare the world and they tried to get all of us thinking what he will do next,” Markarova said. “We just have to continue on pushing, liberating Ukraine. We just have to clearly and all together say to Putin, and to all Russians who support this, that it’s not OK in the 21st century to attack a peaceful neighboring country.”

“Let’s not worry about what Putin thinks he should do,” she added. “Let’s all stay the course, provide more support to Ukraine because it’s going to be much cheaper and better for the democratic world to win this war while it’s still in Ukraine.”

US sees signs Russia is ‘struggling,’ has warned of catastrophe if Putin uses nuclear weapon: Sullivan

US discourages Dennis Rodman from going to Russia to help Griner; he clarifies that he’s not going