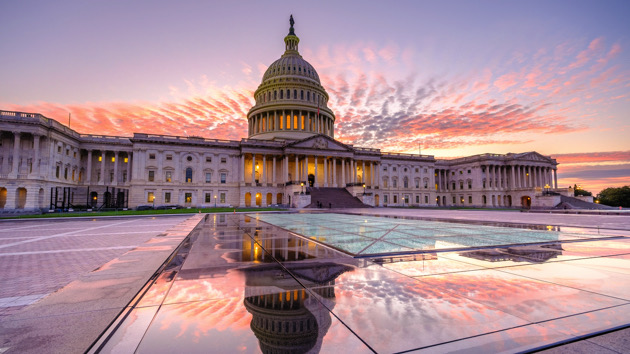 (WASHINGTON) — The Senate on Sunday passed the Inflation Reduction Act (IRA) along party lines, 51-50, handing Democrats a crucial legislative win as the midterm cycle ramps up — despite GOP objections at the billions in spending and drug pricing reforms.

The sprawling climate, tax and health care legislation is now set up for quick passage in the Democratic-controlled House, with timing still to be announced, before President Joe Biden signs it into law.

Included in the bill, supporters are quick to highlight, are measures to foster job creation, raise taxes on large corporations and the wealthy, allow Medicare to negotiate down some prescription drug costs, expand the Affordable Care Act health care program and invest in combating climate change by implementing tax credits for clean energy initiatives, among other things.

Vice President Kamala Harris cast the tie-breaking vote in the Senate with all Democrats in support of the legislation and all Republicans opposed. The proposal was passed via the budget reconciliation process, which requires a simple majority rather than the 60 votes typically needed to overcome a filibuster.

The rules of reconciliation, however, limit what can and cannot be passed with 51 votes — strictures that narrowed the legislation’s scope even in the final days before the vote.

The legislation’s tax provisions, prescription drug-pricing reform, as well as boosted IRS tax enforcement measures, are anticipated to raise an estimated revenue of $739 billion — $300 billion of which Democrats say would go toward reducing the deficit.

The plan would reduce federal budget deficits by $102 billion over 10 years, according to the nonpartisan Congressional Budget Office. Despite the bill’s name, however, the CBO found that it would have a minimal affect on high inflation in the short-term — something Democrats have conceded when pressed.

The bill passed the Senate after a punishing, approximately 16-hour “vote-a-rama,” in which any senator could introduce an amendment to the bill as part of the reconciliation process.

The amendment process fueled painful votes for each party.

Vulnerable Democratic incumbents up for reelection this year had to dance around a vote on the Biden administration’s decision to scrap Title 42, a Trump-era order using coronavirus concerns to prevent migrants from entering the country while seeking asylum. Republicans, meanwhile, mostly voted against a Democratic amendment that would have capped out-of-pocket insulin costs at $35 a month for people with private health insurance.

The IRA passage marks the culmination of grueling negotiations between Senate Majority Leader Chuck Schumer, D-N.Y., and Sen. Joe Manchin, D-W.Va., who had been a consistent obstacle to cobbling together a Democrats-only social spending bill via reconciliation.

The pathway for a successful vote was cemented late last week when Sen. Kyrsten Sinema, D-Ariz., another key centrist, signed on after winning some tweaks to the bill.

Among the changes Sinema won were the eliminations of tax provisions targeting wealthy hedge-fund managers and private equity executives. The Senate rules official, the parliamentarian, also scrapped a provision intended to reprimand drug companies that raise the prices of some prescription drugs faster than inflation for patients with private insurance.

Still, the bill’s passage marks a major step toward President Biden’s campaign promises to tackle climate change, reform drug pricing and other issues; and it gives Democrats a new legislative win to run on heading into the November midterms, in an environment where many voters have soured on Biden’s handling of the economy and historic inflation.

“Today, Senate Democrats sided with American families over special interests, voting to lower the cost of prescription drugs, health insurance, and everyday energy costs and reduce the deficit, while making the wealthiest corporations finally pay their fair share. I ran for President promising to make government work for working families again, and that is what this bill does — period,” Biden said in a statement.

The IRA also extends a streak of achievements for Biden and congressional Democrats, including passage of a bipartisan anti-gun violence bill and legislation to boost the domestic semiconductor industry.

“This bill is going to change America for decades,” Schumer crowed after final passage.

Republicans have already forecasted that they’ll paint Democrats as uncaring about Americans’ financial burdens at a time of rapid price hikes while passing billions of dollars in new spending.

“This idea that this massive tax increase will just somehow be absorbed by corporate America when they will pass those costs along to consumers, and it will make inflation worse,” Senate Minority Whip John Cornyn, R-Texas, said last week.

Sen. Mike Rounds, R-S.D., said on ABC’s “This Week” on Sunday that the IRA would be not a boon to the country but a “boondoggle.”

“What they’re really trying to do is to take dollars in and then redistribute it back out to the places that they think it should be done … This is not the time to be experimenting in that area,” he said.

He also contended that Medicare’s drug negotiating power wouldn’t pay off: “This is not healthy, it’s not good and it will cause problems in the marketplace.”

Race to November: Dr. Oz lays out his platform as Senate race heats up