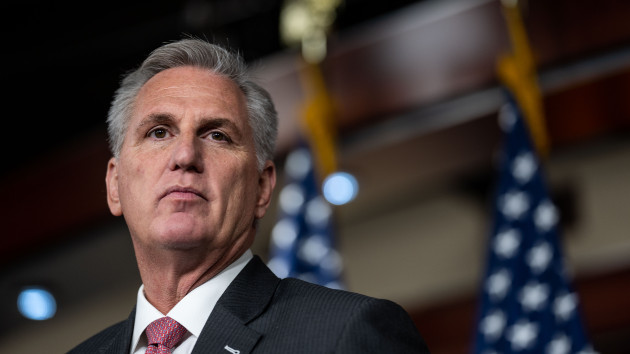 (WASHINGTON) — House GOP Leader Kevin McCarthy was mum Tuesday night when questioned by reporters about being heard on tape saying some Republicans incited violence around the Jan. 6 Capitol attack — and that others could be kicked off social media platforms.

But lawmakers told ABC News they expect the California Republican to explain his reported remarks behind closed doors Wednesday morning when House Republicans gather for their first meeting of the week.

In a new report Tuesday, New York Times reporters Jonathan Martin and Alex Burns released recordings of McCarthy and other GOP leaders made in January 2021 after the riot, discussing comments made before and after the Capitol attack by far-right lawmakers and their concerns over how those comments could potentially provoke violence against other legislators.

“He’s putting people in jeopardy,” McCarthy said of Rep. Matt Gaetz, R-Fla., a Trump loyalist who criticized other Republicans for being insufficiently supportive of Trump, according to the recording of the Jan. 10 call published by The Times. “And he doesn’t need to be doing this. We saw what people would do in the Capitol, you know, and these people came prepared with rope, with everything else.”

McCarthy declined to answer multiple questions from reporters as he walked from his office to the House floor for votes Tuesday evening. But when asked by ABC News if he was worried about the comments jeopardizing his bid for speaker if Republicans retake the House in the upcoming midterm elections, he had a simple answer.

In the meantime, McCarthy’s colleagues are weighing the impact of his newly reported comments.

“He’s going to explain it, and we’ll go from there,” said Rep. Debbie Lesko, R-Ariz. “Let’s see what he says.”

“Trust is not a thing to be measured by one incident,” Rep. Clay Higgins, R-La., told ABC News.

Asked if he would support McCarthy for speaker if Republicans retake the House, Higgins said, “I certainly have a vote and we shall see.”

Rep. Mike Kelly, R-Pa., one of Trump’s first supporters in Congress, said “Oh my God, yes,” when asked if he trusted McCarthy.

Gaetz tweeted out a statement blasting McCarthy and Rep. Steve Scalise, R-La., the GOP whip who suggested Gaetz’s comments were “potentially illegal,” according to the recording published by The Times.

“Rep. McCarthy and Rep. Scalise held views about President Trump and me that they shared on sniveling calls with Liz Cheney, not us,” Gaetz said.

“This is the behavior of weak men, not leaders,” he wrote. “While I was protecting President Trump from impeachment, they were protecting Liz Cheney from criticism.”

Earlier Tuesday, Rep. Andy Biggs, R-Ariz., a senior member of the House Freedom Caucus, told the conservative One America News Network that McCarthy’s recorded comments regarding social media accounts were “problematic” and “the most serious thing.”

Fox News host Tucker Carlson also criticized McCarthy on Tuesday, saying on his show, “Those are the tape-recorded words of Congressman Kevin McCarthy, a man who, in private, turns out, sounds like an MSNBC contributor.”

“And yet unless conservatives get their act together right away, Kevin McCarthy or one of his highly liberal allies … is very likely to be speaker of the House in January. That will mean we will have a Republican Congress led by a puppet of the Democratic Party,” Carlson said.

McCarthy insists he ‘always had a few questions’ about Santos’ resume