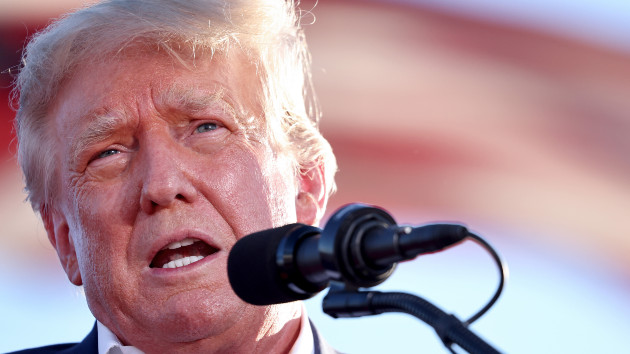 (NEW  YORK) — Former President Donald Trump is scheduled to sit for a deposition Wednesday as part of a defamation lawsuit brought by a former magazine columnist who claims he raped her in the 1990s.

Trump was ordered to appear under oath and answer questions from attorneys for E. Jean Carroll, who Trump described as “not my type” when he denied her allegation that he had attacked her in a dressing room at Bergdorf Goodman nearly three decades ago.

Trump had tried for years to delay the defamation case and avoid the deposition, most recently when Carroll said she intended to sue him in November for the alleged rape itself using a new law in New York that will allow sexual assault victims to sue regardless of how old their allegations are. The new law is scheduled to take effect on Nov. 24.

In a ruling earlier this month, Judge Lewis Kaplan said it “would make no sense” to put off Trump’s deposition in the defamation case just because its contents could be used in Carroll’s future lawsuit.

“The discovery that would occur here would go directly to the claim in this case,” Kaplan said.

The decision also noted that Trump and Carroll “already are of advanced age” and said Trump “should not be permitted to run the clock out” on Carroll’s lawsuit.

Yet the defamation lawsuit may go away on its own. The 2nd U.S. Circuit Court of Appeals ruled that Trump was an employee of the federal government when he denied Carroll’s rape claim, and Trump has sought to have the government substitute for him as the defendant.

The government cannot be sued for defamation.

The appellate court left open the question of whether Trump was acting within the scope of his employment when he allegedly defamed Carroll while denying her claim.

The 2nd Circuit asked the D.C. Court of Appeals, whose law governs the scope of conduct by government employees, to weigh in.

“How the question ultimately will be resolved remains unknown,” Judge Kaplan said. “In the meantime, substitution would be premature.”

An attorney for Trump, Alina Habba, said, “We look forward to establishing on the record that this case is, and always has been, entirely without merit.”

Carroll sat for her deposition in the case last week.