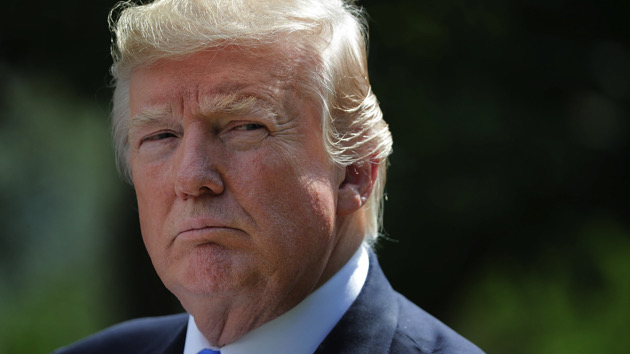 (WASHINGTON) — The FBI executed an unprecedented raid on former President Donald Trump’s Mar-a-Lago estate in Florida on Monday, in search of evidence that sources tell ABC News is tied to his alleged mishandling of classified documents.

It’s believed to be the first search by the federal agency of the residence of a current or former U.S. president. Trump and other Republicans have sharply criticized the raid as a partisan attack and have demanded an explanation.

ABC News has obtained what appears to be the search warrant executed at former President Donald Trump’s Mar-a-Lago property.

The warrant has not yet been posted on the docket. ABC News is not yet publishing the warrant and property receipt.

The filing, which includes two attachments (“Attachment A” and “Attachment B”) indicates that the Justice Department, in its search of the Mar-a-Lago estate, is investigating potential violation of at least three separate criminal statutes, including a statute under the Espionage Act.

Attachment B states that the property to be seized by agents includes “all physical documents and records constituting evidence, contraband, fruits of crime or other items illegally possessed” in violation of 18 USC 793, a statute under the Espionage Act involving the gathering, transmitting or loss of defense information; 18 USC 2071, which involves any federal government employee who, willfully and unlawfully conceals, removes, mutilates, obliterates, falsifies or destroys public records; and 18 USC 1519, obstruction of justice.

Under the receipt showing property that was seized from Trump’s estate, agents note they recovered 11 sets of documents of various classifications ranging from confidential to top secret and sensitive compartmented information.

Other items included in the receipt include one labeled “Info re: President of France,” an executive grant of clemency for Trump ally Roger Stone, binders of photos, a “potential presidential record” and a leather-bound box of documents.

Trump spokesman Taylor Budowich said, “The Biden administration is in obvious damage control after their botched raid where they seized the President’s picture books, a ‘hand written note,’ and declassified documents. This raid of President Trump’s home was not just unprecedented, but unnecessary—and now they are leaking lies and innuendos to try to explain away the weaponization of government against their dominant political opponent.”

Republican members of the House Intelligence Committee defended former President Donald Trump while attacking the integrity of the Department of Justice and the FBI during a press conference on Capitol Hill Friday.

“President Donald Trump is Joe Biden’s most likeliest political opponent in 2024 and this is less than 100 days from critical midterm elections,” Rep. Elise Stefanik, the No. 3 House Republican, said. “The FBI raid of President Trump is a complete abuse and overreach of its authority.”

Intelligence Committee Ranking Member Michael Turner, R-Ohio, told reporters that Republicans on the committee are “glad” the Department of Justice has begun the process of releasing “some” of the information about the raid to the public, but called for more. Turner said committee Republicans want access to the affidavit outlining the “imminent security threat” justifying the raid.

“Our request remains that the director of the FBI and the attorney general disclose to this committee the imminent national security threat upon which they based their decision to order a raid on the president’s home, again underscoring that there were many other options available to them,” Turner claimed. “We believe after the release today that these questions will remain unanswered.”

“The real story will be with the release of the affidavit itself,” Rep. Brian Fitzpatrick, R-Pa., added. “The bureau and the attorney general and the DOJ obviously made the decision that this extreme measure was necessary. We will await their rationale for why that extreme measure was justified and not some lesser intrusive means.”

Turner did not call for the public disclosure of the underlying affidavit, which is expected to remain under seal, but did say that members of the intelligence committee and other committees of jurisdiction should have access. He called on committee Democrats to support a subpoena for this affidavit if there is non-compliance.

House Minority Leader Kevin McCarthy dodged ABC News’ questions about whether he supports the release of the warrant authorizing the raid, instead saying he’d like to see the subpoena against Trump.

Trump received a subpoena in the spring for documents that he did not return to the National Archives, ABC News has reported. It’s unclear to what extent, if at all, he complied. The Justice Department has not publicly confirmed the existence of a subpoena.

Stefanik promised a “fulsome investigation” if Republicans retake the gavel in November.

“House Republicans are committed to immediate oversight, accountability and a fulsome investigation to provide needed transparency and answers to the American people,” Stefanik said.

The group also emphasized that they’re in “full support” of those who serve in the FBI and law enforcement agencies and condemned any violence against agents, while also repeatedly calling into question the credibility of law enforcement.

House Speaker Nancy Pelosi is blasting Republicans for their rhetoric following the FBI raid on Mar-a-Lago.

Asked by ABC News about concerns over possibly increasing levels of violence against law enforcement and public officials after recent rhetoric from the GOP, Pelosi said Friday that she knows “very well how vicious” some of those threats can be, and said they’ve been “exacerbated” by former President Donald Trump.

“You would think there would be an adult in the Republican room that would say, ‘Just calm down. See what the facts are and let’s go for that.’ Instead of … instigating assaults on law enforcement,” Pelosi said.

When asked if she wants Congress to open more investigations into the material that Trump allegedly took, Pelosi said she’s not currently making plans for that and is going to let the investigation unfold.

Pelosi said she was not briefed on any aspect of the FBI raid or what classified information was being held.

She said she only knows “what’s in the public domain,” but she added, “if the nature of these documents is what appears to be, this is very serious.”

The Washington Post is reporting that classified documents related to nuclear weapons were among the items agents sought by federal agents at Mar-a-Lago.

Multiple sources familiar with the investigation told ABC News that the Justice Department and the FBI believed Trump continued to keep sensitive classified documents that had national security implications and that in recent weeks additional information came in suggesting that Trump was not complying with requests to provide the information the Justice Department believed he had in his possession.

Multiple sources familiar with the investigation told ABC News that the Department of Justice and the FBI believed former President Donald Trump continued to keep sensitive classified documents that had national security implications, and that in recent weeks additional information came in suggesting Trump was not complying with requests to provide the information the Justice Department believed he had in his possession.

The information was sensitive enough that authorities wanted to take it back into possession immediately.

Former President Donald Trump is calling for “the immediate release” of the warrant that allowed FBI agents to search his Mar-a-Lago estate on Monday.

“Not only will I not oppose the release of documents related to the unAmerican, unwarranted, and unnecessary raid and break-in of my home in Palm Beach, Florida, Mar-a-Lago, I am going a step further by ENCOURAGING the immediate release of those documents, even though they have been drawn up by radical left Democrats and possible future political opponents, who have a strong and powerful vested interest in attacking me much as they have done for the last 6 years,” Trump said late Thursday in a post on his social media platform, Truth Social.

“This unprecedented political weaponization of law enforcement is inappropriate and highly unethical,” he added. “The world is watching as our Country is being brought to a new low, not only on our border, crime, economy, energy, national security, and so much more, but also with respect to our sacred elections!”