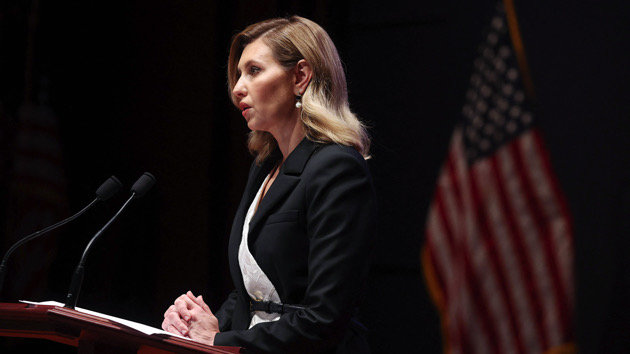 “You help us and your help is very strong,” Zelenska said in a rare address by a first lady to U.S. lawmakers on Wednesday, via a translator. “While Russia kills, America saves, and you should know about it. But unfortunately, the war is not over.”

The Ukrainian first lady arrived at the Capitol Visitors Center Congressional Auditorium with House Speaker Nancy Pelosi shortly after 11 a.m. on Wednesday. Pelosi introduced Zelenska, stating the Congress is “honored” to welcome her from the war zone.

“Usually the wives of the president are exclusively engaged in peaceful affairs — education, human rights, equality, accessibility — and maybe you expected from me to speak on those topics,” she said. “But how can I talk about them when an unprovoked, invasive terrorist war is being waged against my country?”

“Russia is destroying our people,” she said.

The first lady spoke about the conflict’s toll on women and children. She has been separated from her husband, Ukrainian President Volodymyr Zelenskyy, for much of the time since the war broke out in February.

She told lawmakers she wanted to address them not just as politicians but as mothers, fathers, sons and daughters as she displayed images of some of the children killed in the conflict — including a 4-year-old named Liza who was killed in a Russian missile strike in the city of Vinnytsia last week.

While the slideshow of war casualties played behind her, Zelenska told lawmakers: “Those are Russia’s ‘hunger games’ — hunting for peaceful people in peaceful cities of Ukraine.”

A photograph of Liza’s stroller on the ground after the attack was shown to lawmakers on the screen behind Zelenska.

Lawmakers in May passed a $40 billion aid package to Ukraine for military and economic assistance.

Zelenska made many stops in Washington this week, holding meetings with high-profile officials including Secretary of State Antony Blinken and U.S. Agency for International Development Administrator Samantha Power.

On Tuesday, she met with U.S. first lady Jill Biden at the White House for a bilateral meeting.

President Zelesnkyy said on Tuesday he expects from his wife’s visit “significant results for Ukraine in cooperation with America. ​​It is important right now.”

“I really believe that it will be heard by those on whom decision-making in the US depends,” Zelenskyy said of his wife’s address to Congress.

Zelenskyy addressed U.S. lawmakers himself virtually in March, receiving a standing ovation after invoking Pearl Harbor in his plea for additional military aid.

Texas Gov. Abbott meets with Uvalde victims amid scrutiny over engagement with community