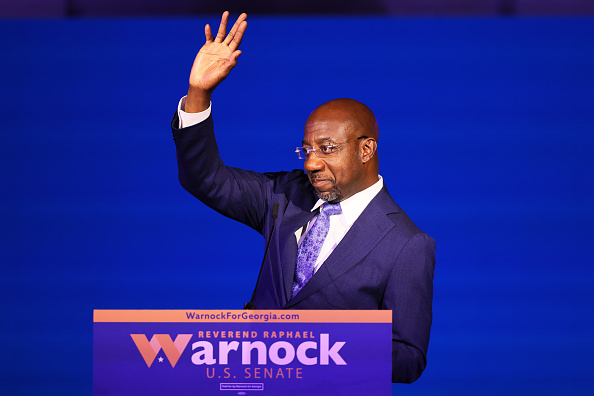 (WASHINGTON) — In the Georgia Senate race, ABC News reports that no candidate will receive more than 50% of the vote in Tuesday’s midterm elections.

There will be a Dec. 6 runoff election between Democratic incumbent Raphael Warnock and Republican challenger Herschel Walker.

As of Wednesday morning, with 96% of the expected vote reported, Warnock and Walker are tied at 49% each with Warnock leading by some 17,000 votes.

Speaking to supporters at an event on Tuesday night, Walker urged patience while projecting confidence.

Walker acknowledged he was in a tight battle with Warnock: “He’s gonna be tough to beat, but let me tell you what — he got the wrong Georgian here don’t he.”

At his own event early Wednesday, Warnock said, “Keep the faith and keep looking up.” Referencing the impending call of a runoff, he said, “Whether it’s later tonight, or tomorrow or four weeks from now, we will hear from the people of Georgia.”

Georgia law requires a candidate to receive the majority of the votes cast in order to be declared the winner. A majority is defined as 50% of the votes plus one.

If no candidates garner the votes needed, a second election, called a runoff, is held on the 28th day after the general election with the top two vote-getters advancing. (A third-party candidate, Chase Oliver, received about 2% of the vote in Tuesday’s election but won’t be competing in the runoff.)

The candidate who wins the highest number of votes cast in the runoff is declared the winner.

Anyone who was registered to vote in the state by Monday can vote in the runoff election.

The Senate race so far

The Georgia Senate race was one of the most competitive in the country and seen as both a key part of Democrats’ plans to keep control of the Senate, currently split at 50-50, and Republicans’ efforts to topple that bare majority.

Republicans invested millions in unseating Warnock, a noted Atlanta reverend, given the state’s historic GOP tilt at a time when polls showed the national mood had soured against Democrats’ unified control of Washington.

Still, Walker, a businessman and college football legend in Georgia, faced a tough foe in Warnock. The incumbent remained disciplined in his messaging, seeking to fend off Republican attempts to cast him as a radical and lackey of the unpopular Biden White House by focusing on proposals like lowering the cost of insulin and his cooperation with Republican lawmakers like Texas Sen. Ted Cruz on bipartisan issues like infrastructure investment.

Walker, meanwhile, coasted through his primary with the endorsement of former President Donald Trump but faced scandal since virtually the start of his bid.

Walker had written a memoir recounting his diagnosis with dissociative identity disorder, or D.I.D., a complex mental health condition characterized by some severe and potentially debilitating symptoms. His Senate campaign website stated that his D.I.D. was caused by childhood trauma.

During the campaign, some Democrats resurfaced years-old allegations from Walker’s ex-wife that he held a gun to her head.

Walker had told ABC News in 2008, in response to the account from ex-wife Cindy Grossman that he threatened her with a weapon, that he had no recollection of the incident she described.

His campaign was roiled in the final weeks of the race when he denied accusations from two women who claimed that, in 1993 and 2009, he paid for them to have abortions after Walker cast himself as a deeply conservative candidate who favored a ban on the procedure with no exceptions for rape or incest.

“I’m done with this foolishness. This is all a lie, and I will not entertain any of it,” Walker said after the second woman came forward with her abortion allegation.

Despite the controversy, Republicans flocked to his support, citing his steadfast denials, with national figures like Florida Sen. Rick Scott, the chair of the National Republican Senatorial Committee, appearing on the trail with him.71045364