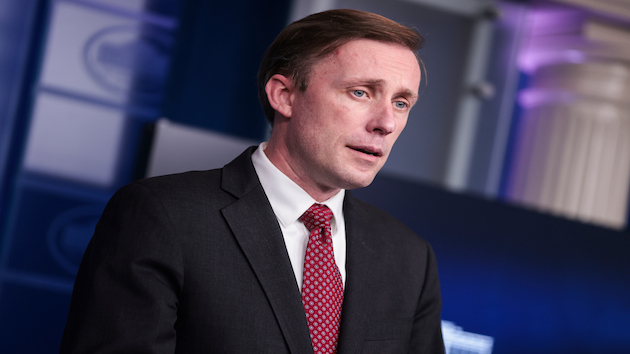 (WASHINGTON) – As the standoff between Russia and the United States continues, White House National Security Adviser Jake Sullivan warned of a “very distinct” possibility Russia will attack Ukraine at “any time now.”

“We believe that there is a very distinct possibility that Vladimir Putin will order an attack on Ukraine. It could take a number of different forms. It could happen as soon as tomorrow or it could take some weeks yet,” Sullivan said in an interview with ABC “This Week” Co-Anchor Martha Raddatz on Sunday.

“[Putin] has put himself in a position with military deployments, to be able to act aggressively against Ukraine at any time now,” he added, stressing that the United State is working with allies and continues to urge a path of diplomacy.

Sullivan said the United States is ready to respond, no matter what Russia decides.

“If they choose to go down the path of escalation instead, it will come at enormous human cost to Ukrainians. But it will also, we believe, over time, come at real strategic cost to Vladimir Putin,” he said.

ABC News has learned Putin now has 70% of his troops in place to possibly launch a full-scale attack on Ukraine. The report comes as U.S. troops began arriving in Poland over the weekend after President Joe Biden ordered deployments to reassure NATO allies.

Raddatz pressed Sullivan on the message U.S. troop deployments sends to the Russians as the U.S. continues to push for a diplomatic solution: “You talk about this diplomatic path, but 1,700 US troops just arrived in Poland, part of the 3,000 going in. Three hundred more sent to Germany. … (It) sounds like you’re no longer trying to de-escalate the situation.”

“We have since the beginning for months now, as we have warned about the possibility of a Russian invasion of Ukraine, pursued a two-track approach, deterrence and diplomacy,” he argued.

“Those forces you just referred to have not been sent to fight Russian forces in Ukraine. They have been sent to defend NATO territory because we have a sacred obligation under Article 5 to defend our NATO allies and to send a clear message to Russia, that if it tries to take any military action or aggression against our NATO allies, it will be met with a stiff response, including by the U.S. forces who are on the ground there now,” Sullivan said, adding the U.S. has been “equally clear” it is ready to have “substantive discussions on matters of European security” with Russia.

Sullivan would not get into specifics on how certain an attack is, even though Sen. Marco Rubio, R-Fla., reportedly said after a briefing on the situation that a Russian invasion was a “near certainty.”

“I’m not going to make a prediction about what is going to unfold in the coming days. All I’m going to say is that we, the United States, under the direction of President Biden, are ready either way,” Sullivan said when pressed by Raddatz.

“We are ready,” he said, adding, “And we are ready to respond in a united, swift and severe way with our allies and partners should he choose to move forward with a military escalation.”

As the window for diplomacy appears to be rapidly closing, U.S. officials have repeatedly said they do not believe Putin has made up his mind on how to proceed but no longer describe the threat of a possible invasion as “imminent,” White House press secretary Jen Psaki said Wednesday.

With athletes from around the world gathering to compete in the Winter Olympics in China, Raddatz asked Sullivan if the U.S. believed Putin would hold off on an attack until the games conclude on Feb. 20 — allowing more time for the ground to freeze to facilitate tank movements.

Sullivan said it was possible but stressed that an attack could also come sooner.

“At this point, we’re in the window, meaning that we can’t just assume it’s going to be a couple of weeks off. Is that a possible scenario? Are there reasons to believe that it could happen in that timeframe? Yes. But there are also reasons to believe that Russia, under the direction of President Putin, could take steps before then.”

Sullivan appeared to brush off concerns over China’s alliance with Russia and the impact it could have on the U.S. threat of sanctions after Putin and President Xi Jinping met in Beijing Friday.

“That is an economic power powerhouse, China. Could that undermine your plans for severe sanctions?” Raddatz asked.

“Our view is that China is not in a position to compensate Russia for the economic losses that would come from our sanctions. That’s the analysis that we and the European share, and we believe the Russians and Chinese understand that as well,” Sullivan responded, adding that China would also feel the cost in the “eyes of the world” of supporting Russia.