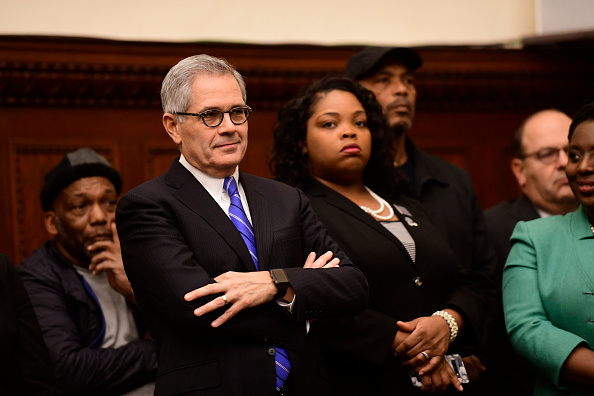 (PHILADELPHIA) — Pennsylvania’s Republican-led State House voted overwhelmingly to impeach Philadelphia District Attorney Larry Krasner over what they allege is his lax approach to crime, leniency toward criminal offenders and other allegations.

The House’s 107-85 vote on Wednesday will send the matter to the Republican-controlled State Senate. This sets the stage for what would be the first Pennsylvania Senate impeachment trial in nearly three decades.

With a 29-21 majority in the state Senate, Republicans will need a two-third vote to convict and remove Krasner from office.

In their resolution to impeach Krasner, State House Republicans cited what they called his alleged lax approach to crime, including his office’s policies to seek more lenient sentences for offenders, as well as his failure to prosecute some low-level offenses such as drug possession and prostitution.

Krasner said in a statement that the vote was the only time the state House has ever “used the drastic remedy of impeachment of an elected official because they do not like their ideas.”

He accused House Republicans of impeaching him without presenting a “single shred of evidence connecting our policies to any uptick in crime.”

“History will harshly judge this anti-Democratic authoritarian effort to erase Philly’s votes – votes by Black, brown, and broke people in Philadelphia. And voters will have the last word,” he added.

Republicans have blamed Krasner and his policies for a surge in gun violence in Philadelphia over the past few years, a trend consistent in cities across the country since the start of the pandemic.

Republican State Representative Martina White, who introduced the impeachment articles, said at Wednesday’s vote: “This man has denied that there is even a crisis of crime happening on our streets.”

Krasner’s office filed a motion in October seeking to quash a subpoena issued by the state legislative committee searching for grounds to impeach him, describing it as a “politically motivated effort” in a statement. In a letter to the committee, Krasner accused them of failing to specify the basis of his impeachment and repeatedly refusing to speak with him

Krasner is one of many progressive prosecutors elected in recent years amid growing concerns about racism and over-incarceration in the U.S. criminal justice system.

Krasner was overwhelmingly reelected by voters last year with significant support from Black voters living in neighborhoods historically most impacted by gun violence, according to reports from local news outlets like The Philadelphia Tribune and The Philadelphia Inquirer.

His office also reported that violent crime and all categories of crime remain historically low compared with the 1990s.

Democratic Representative Joanna McClinton, whose district includes parts of Philadelphia, accused Republicans of wanting to “overturn the will” of the electorate during the House session on Wednesday.

“Impeachment now seems to be a measure that we’re using when we have a disagreement on public policy,” McClinton said.