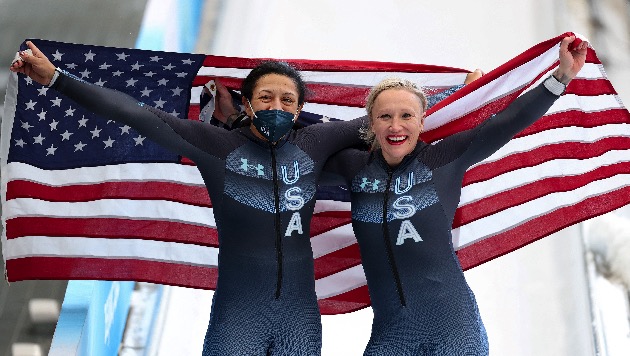 Meyers Taylor’s silver was especially impressive considering she spent a week in quarantine after a positive COVID-19 test.

Humphries, meanwhile, who was competing for the United States in the Olympics for the first time after winning two golds for Canada in the two-person bobsled, dominated the competition, winning by more than 1.5 seconds.

Meyers Taylor, who had been selected as a flag bearer for Team USA at this year’s Winter Olympics, was forced to isolate after testing positive for the virus on Jan. 29 and missed the opening ceremony of the Beijing Games on Feb. 4.

Athletes inside the closed loop at the Olympics, which separates athletes, team officials and members of the press from the rest of the Chinese population, live under a daily regimen of temperature checks and COVID tests administered by workers dressed in full-body personal protective equipment.

She spent isolation away from her teammates, husband and young son, who has Down syndrome and is still nursing, she told ABC News earlier this month.

During that time, she missed crucial training days but was able to get an exercise bike dropped off to train in isolation.

Meyers Taylor was permitted to reenter the Olympic village on Feb. 5 after receiving two negative COVID-19 tests, per Olympics regulation.

Meyers Taylor ranks No. 1 in the world in two-man and monobob and is the only woman to win four Olympic bobsled medals for the U.S.

Going into her fourth Olympics, she had two silver medals and one bronze.