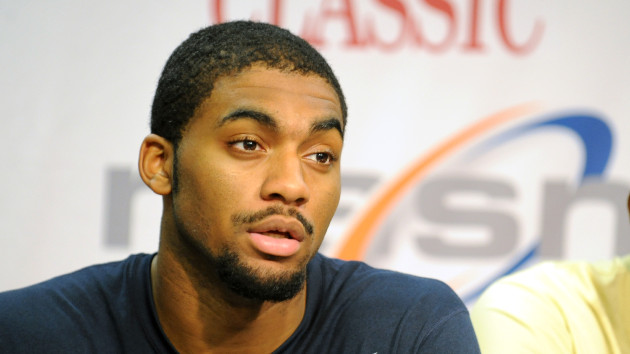 (NEW YORK) — Sitting in his living room at home in the U.S., Maurice “Mo” Creek holds his mother’s hand days after escaping Ukraine as she holds back tears.

“I still sit here and I cry every day,” Pammy Morgan told ABC News. “Maurice was over there and it was not looking good. It was sickening. I mean, I’ve lost like 10 pounds. We couldn’t sleep. We couldn’t eat — phone’s ringing off the hook.”

Creek, who played for the University of Indiana and George Washington University, spent last Saturday and Sunday in and out of a bomb shelter in Mykolaiv, Ukraine. He said he then traveled 130 miles to Odessa on Monday before arriving at the Moldovan border, where he spent nine hours in the immigration line.

By Tuesday, Creek was in Iasi, a city in eastern Romania, miles away from the madness with plans of catching the first flight to the United States. He was reunited with his family last Thursday.

“When he made it here, it was a breath of fresh air. I knew he was safe” his mom said.

“The thing that kept me together was my spiritual glue,” Morgan said. “I had to keep it strong for him and I was telling people please pray, fast pray. You know, I know media doesn’t like to hear that a lot. I didn’t care. I needed my son home.”

Creek, who moved to Mykolaiv in December to play basketball for MBC Mykolaiv, a professional basketball team in Ukraine, said he is grateful that he got to escape. However, he still thinks about his teammates and friends who remain at war.

“I just pray for them every day and their families,” Creek told ABC News. “Because when I saw them for the last time, I shedded some tears because it’s like not only will I maybe not ever see you again on the basketball level. I may not never see you on the livelihood level because of what’s going on right now.”

While in Ukraine, Creek said what he saw reminded him of the popular military combat video game, Call of Duty. Hearing sirens, seeing pilot jets dart above his head, and having to stay at a bomb shelter himself, Creek said being terrified was an understatement.

“You start really feeling the actual effects of the war. Like, I was getting jets going across my building, then I have to go to the bomb shelter and I look on social media, you see one jet hit one lady’s house like with a bomb like you know, with a missile,” Creek said. “And it’s like, dude, I’m not sleeping today. I’m not doing that. I’m paranoid, terrified.”

But Creek said that wasn’t the scariest part of being an American trapped in Ukraine. He said he was scared every night since the city was pitch black due to Marshall law.

“The scariest moments for me that I felt was when it hit at nighttime and it’s no light; it is no lights,” he said. “I’m talking about it looked like if you had a plug, and you could plug every light to the city like somebody just took the plug out and the whole city was black.”

“So now you can’t feel nothing and you can’t see nothing. I’m like, ‘Yo, I can’t even see if a Russian is coming up in my building trying to shoot,"” he said

“Because they have night vision,” his mom said.

Creek said what got him through his time in Ukraine was the phone calls, emails, texts, social media outreach and most importantly, the prayers from people. Creek said his biggest advice for anyone who is currently stuck in Ukraine and is losing hope as he once felt, is to keep your hope alive.

Ukrainian President Volodymyr Zelenskyy told the U.K. Parliament Tuesday that his country will not give up the fight.