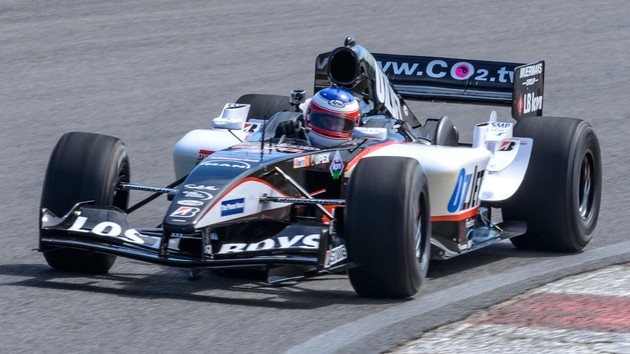 Mercedes’ Lewis Hamilton could win his eighth world championship, a feat no other F1 driver has accomplished in the sport’s 70-year history. Hamilton and his No. 1 rival, Red Bull’s Max Verstappen, are tied in the standings.

The glitz and glamour of F1, the world’s premier motor racing series, are constantly on display: the podium champagne sprays, elephantine yachts anchored in the French Riviera for the Monaco Grand Prix, globe-trotting teams that travel to far-flung destinations for races closely followed by 1.9 billon spectators.

With the hit Netflix F1 docuseries “Drive to Survive” helping to grow the fanbase, the sport’s sustainability efforts and commitments are drawing attention, too. Hamilton, the winningest F1 driver, and Aston Martin’s Sebastian Vettel, a four-time world champion, have been calling on F1’s governing body to actively change its practices.

Lewis, who has banned plastic from his home and office, sold his private jet and is an investor in U.K. vegan burger chain Neat Burger, said the sport can harness new, synthetic fuels to reduce its carbon footprint.

Jennie Gow, an F1 presenter for the BBC who is featured on “Drive to Survive,” said Vettel has the “biggest agenda in terms of influencing the green movement.”

“He has a clear idea of where he stands with regards to our impact on the environment and how he would like to make a bigger contribution,” she told ABC News.
In July, Vettel joined 300 volunteers to pick up trash and debris left behind at the track after the British Grand Prix. He also helped build a bee hotel in the shape of an F1 race car with students to highlight the world’s dwindling bee population and toured Iceland’s Climeworks Orca plant, the largest direct air capture and storage plant that permanently removes CO2 from the air.

“If you look at the bigger picture, there’s a certain responsibility we have as Formula 1 when we go to different places in the world and we set up these huge events which bring massive excitement,” Vettel told The New York Times earlier this year. “We cannot just go there, do our show, and then leave everything else behind. To ensure that nothing is left behind, we need to be ready to take a little bit of our margin off and invest into those things because they do come at a cost.”

It’s not just the drivers who are taking sustainability seriously. Pirelli, F1’s exclusive supplier of tires, recycles the teams’ used tires — more than 1,600 per race — at the company’s seven factories. But the Italian manufacturer wants to do even more to lower its carbon footprint.

“We are investigating many areas to be more green — from the production process to raw materials to water usage and sustainable energy in factories and transportation,” Mario Isola, head of F1 and car racing at Pirelli, told ABC News. “The process is constantly under revision. We’re discussing if we can reduce the number of tires we transport.”

Moreover, the company has increased its use of renewable materials, eliminated single-use plastics from its trackside operations and has successfully complied with a number of sustainability audits that focus on carbon emissions. Pirelli also set a company-wide target of reducing overall CO2 emissions by 25% (compared to 2015 levels) by 2025 and purchasing 100% of its electricity from renewable sources.

“Sustainability is a must for Pirelli,” Isola said.

Stefano Domenicali, F1’s chief executive, said the sport’s mission is to achieve a net zero carbon footprint by 2030 and transition to 100% renewable electricity at all F1 and team facilities. Solar panels have been installed at the French and Canadian circuits, with the Circuit de Catalunya in Spain 100% renewably powered. Approximately 256,000 CO2 equivalent tonnes are generated in an entire race season, according to F1.

In 2025, sport officials plan to unveil a new, second-generation hybrid power unit that will be carbon neutral and powered by a drop-in advanced sustainable fuel, a top priority for the series. A global fan survey, conducted this year by Nielsen Sports, Motorsport Network and F1, found that two-thirds of respondents from 187 countries “are aware of F1’s drive towards introducing sustainable fuels by mid 2020s.”

Williams Racing, a storied team in the F1 series, announced in October that it has committed to becoming climate positive by 2030. The team is a signatory of the UNFCCC Sports for Climate Action Framework and recently gained FIA Three-star environmental accreditation.

“Formula One has the ability to create technical solutions to help tackle the challenges we face as a planet. As we progress towards our goal to be climate positive in the years ahead, my hope is that Williams Racing can inspire all those connected with our sport and beyond, using motorsport as a catalyst for significant and long-lasting change,” Jost Capito, CEO of Williams Racing, said in a statement.

Fred Smith, a contributing editor at Road & Track, said F1 has been slow to enact sustainable policies and programs. He pointed to the extreme race schedules that require the 10 teams and support staff to crisscross various continents week after week.

“It’s the weight of a circus,” Smith told ABC News of the teams’ air travel. “Heavy carbon offsets are needed.”

He added, “F1 is less interested in sustainability than the drivers. It’s not too concerned about local or environmental issues.”

Smith would like to see F1 take a similar approach to Extreme E, a new concept in motorsports where drivers compete in electric SUVs in five remote landscapes that are “already damaged or severely under threat of climate change from a range of serious issues including melting ice caps, deforestation, desertification and rising sea levels,” according to the racing series.

Scientists voyage with the five Extreme E teams aboard RMS St Helena, a former British Royal Mail cargo ship that has been refurbished and transformed into a “floating paddock” and scientific base. Fans are not allowed to attend the off-road races and each team is limited to eight people (two drivers, one engineer and five mechanics).

Extreme E has even appointed an independent scientific committee to advise on the series’ education and research programs, event logistics and impact as well as recommending initiatives that support local communities in each race location. F1’s Hamilton is the founder of team X44.

The constant travel will likely not change in F1, according to Gow, and untapped markets like Africa could be added to the demanding racing schedule in coming years.

“Races will continue to happen all over the world. F1 is a global sport and appeals to many different markets,” she said, adding, “F1 is taking a lot of steps when it comes to reducing its carbon footprint. It has a real sustainability agenda.”

Formula 1 heads to Miami for the first time