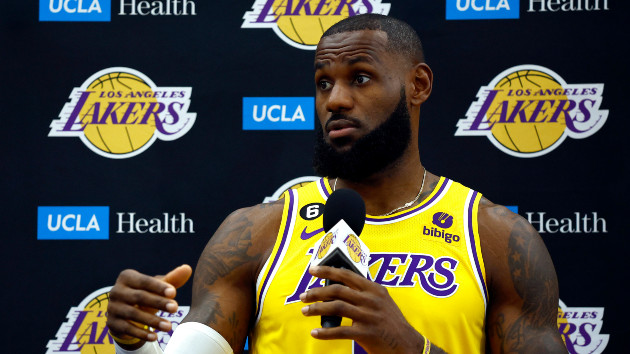 (NEW YORK) — LeBron James is about to start his 20th season as a professional basketball player in the NBA. But after an announcement on Wednesday, James will also be starting his first season as part owner of a Major League Pickleball team — and he is bringing a few familiar friends along with him.

“Having SC Holdings, LRMR Ventures, and their incredible group as owners and investors in Major League Pickleball is not just great for MLP, it’s a watershed moment for pickleball in general,” said MLP Founder Steve Kuhn. “Pickleball is the fastest-growing sport in the country, building communities in cities and towns all over the world. This investment and the platform that this group provides will significantly help us with our goal to reach 40 million pickleball players by 2030.”

Major League Pickleball’s immediate plans will be to expand from 12 to 16 teams and, in 2023, players will compete in six tournaments across six U.S. cities for more than $2 million.

“Pickleball is one of the most exciting growth opportunities in sports because of its committed and engaged community across the U.S.,” said Jason Stein, Managing Partner of SC Holdings. “People are obsessed with the game, as both participants and fans, and we’re excited to use our collective experience and expertise across sports, media, and entertainment to reach new participants and expand the community. We’re thrilled to become partners of Major League Pickleball – which as a league and sport is just getting started.”

MLP confirmed that they plan to announce new owners to the other expansion teams in the coming weeks. But, whoever the new owners are, they will be joining a growing field of well-known owners in the growing sport, including Super Bowl Champion Drew Brees, entrepreneur Gary Vaynerchuk (Gary Vee), famed lecturer and research professor Brené Brown, co-owner of the Milwaukee Bucks Marc Lasry, former World No. 4 tennis player James Blake, healthcare executive Molly Joseph and from Bravo’s Million Dollar Listing New York and Founder and CEO of Serhant, Ryan Serhant.

This year marks the 57th anniversary since pickleball was invented in 1965 on Bainbridge Island, a short ferry ride from Seattle, Washington, according to USA Pickleball. The sport has enjoyed meteoric growth over the past several years and, in 2021, Pickleball grew to 4.8 million players in the United States, according to the 2022 Sports & Fitness Industry Association (SFIA) Single Sport Report on Pickleball. This represents a 14.8% increase from 2020 to 2021 and follows on the heels of 21.3% growth the previous year and culminating to an 11.5% average annual growth rate over the past five years, according to USA Pickleball.

Kyrie Irving, Brooklyn Nets to donate $500,000 each to Anti-Defamation League