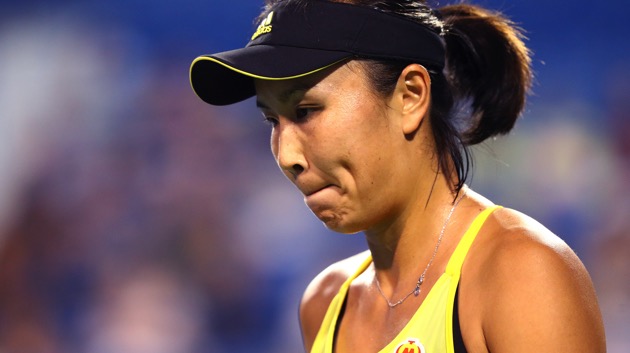 (BEIJING) — The president of the International Olympic Committee said he held a face-to-face meeting with Peng Shuai, the Chinese tennis star who retreated from the public eye after accusing a former top Chinese Communist Party official of sexual assault.

Peng also gave her first international interview on Sunday since the saga, speaking out in a carefully coordinated sit-down interview with French outlet L’Equipe. Peng denied that she had ever been sexually assaulted and said her since-deleted social media post on the allegation “has given rise to a huge misunderstanding from the outside world.”

“I hope that the meaning of this post will no longer be distorted,” Peng told L’Equipe. “I never said anyone sexually assaulted me.”

“It’s just that a lot of people, like my friends including from the IOC, messaged me, and it was quite impossible to reply to so many messages,” Peng said.

In a statement Monday, the IOC said its president, Thomas Bach, had dinner with Peng on Saturday at the Olympic Club in Beijing. IOC member Kirsty Coventry and the former IOC chair of the athletes’ commission were also there.

Later that evening, Peng attended the mixed curling match between China and Norway with Coventry, according to the statement.

Though Peng did not qualify for the Winter Olympics, the IOC said she told Bach that she will attend several Olympic events over the coming days.

The IOC said the meeting followed “a series of telephone conversations with Peng Shuai over the past few months, which started on 21 November.”

On Nov. 2, 2021, a post from Peng’s verified account on Weibo — a Chinese social media platform — was published. In it, she accused Zhang Gaoli, the former vice premier of the Chinese Communist Party, of sexual assault, and said she had a years-long affair with him.

“I have no evidence, and it is impossible to leave evidence at all. … You are always afraid of what recorder I bring, leaving evidence or something,” the post read. “But even if I become like an egg hitting against a rock and like moths extinguished in the flame, I will tell the truth about you.”

Shortly after it was published, the post disappeared, and so did Peng. The athlete became entirely absent on social media, sparking concern from the tennis community and from fans around the world.

On Nov. 17, Chinese state-run media released an email allegedly from Peng to the global Women’s Tennis Association. In it, Peng denied the sexual assault allegations and said she was OK, just “resting at home.” WTA Chairman and CEO Steve Simon, whom the email was addressed to, told ABC News in November that he had a “hard time believing that Peng Shuai actually wrote the email we received or believes what is being attributed to her.”

Peng told L’Equipe that she deleted the post, and that her only reason for doing so was: “Because I wanted to.” She did not respond to questions from the French press about whether Chinese authorities gave her any problems over the post.

“My sentimental problems, my private life, should not be involved in sports and politics,” Peng told L’Equipe. “And sport should not be politicized because, when it is, most of the time it amounts to turning one’s back to the Olympic spirit and it goes against the will of the world of sport and of the athletes.”

In the IOC’s statement Monday, Bach said he invited Peng to visit the IOC and The Olympic Museum in Lausanne, Switzerland, once the COVID-19 pandemic is over and she accepted. Coventry and Peng also agreed they would remain in contact, according to the statement, “and all three agreed that any further communication about the content of the meeting would be left to her discretion.”

In Peng’s interview with L’Equipe, she reflected on how tennis has “transformed” her life, adding that it is “sometimes difficult to know how to say goodbye and retire.” The 36-year-old said that multiple surgeries and the pandemic has forced her out of practice for so long that she thinks it will be difficult to regain her physical strength and compete again.

As for what’s next, Peng only expressed hope for more unity in the world going forward.

“If we talk about my hopes, I hope that between the countries of the world, with different cultures and systems, there will be less antagonism and deeper understanding,” Peng said. “And I hope that each of us can live in joy and happiness. I hope that everyone, in their life path, may encounter fewer pitfalls and more peace of mind.”

Finally, she wished the athletes participating in the Winter Games the best of luck and cheered on her home team, adding, “Of course I very much wish that the Chinese athletes bring home a lot of medals.”