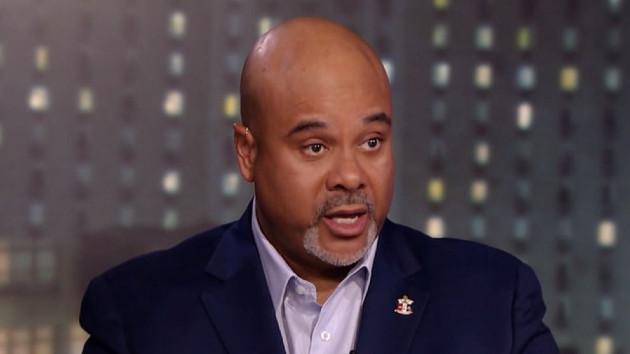 (NEW YORK) — For decades, Black quarterbacks struggled to make a name for themselves in the NFL despite their impressive skills on the field. In recent years, more and more Black players, such as Lamar Jackson and Patrick Mahomes, have been leading the offense.

ESPN reporter Jason Reid chronicled the long struggle to break the NFL quarterback color barrier in his new book, Rise of the Black Quarterback: What it Means for America.

Reid spoke with ABC News Live Prime Friday about the book and the issue and said while the league has made progress in recent years when it comes to its longstanding race issues, there is a whole lot more to be done to ensure equity among all levels of the game.

“Fritz Pollard was such a great rep for Black players in college football who really wanted to play in the NFL. He really was the one to blaze the path,” Reid told ABC News.

Racist policies, however, set back a whole generation of Black athletes as league owners informally banned Black players from 1933 to 1946, according to the NFL Football Operations archives. Even though Black athletes were allowed to join teams in the post-World War II era, the quarterback position kept going to white players.

“There was a belief in the NFL that Black players were not smart enough to play the ultimate thinking man’s position,” Reid said. “They thought they were inferior.”

On the contrary, Reid said that many Black quarterbacks at the college level and in other football leagues were winning games for a long time.

Warren Moon, the first Black quarterback to be inducted into the Pro Football Hall of Fame, told ABC News that he faced those struggles while playing football as a kid all the way up to his professional career.

Despite succeeding as a quarterback at the University of Washington in the mid ’70s, Moon wasn’t immediately signed by the NFL and had to play in the Canadian Football League for six seasons. In 1984, Moon was signed by the Houston Oilers and would go on to play with them for 10 seasons.

“I faced a lot of hate and personal ridicule, but I still wanted to play the position and show I could play it. I knew if I could play well it would help the next generation of players,” Moon told ABC News.

Moon was the only Black quarterback in the league when he started. More quarterbacks slowly began coming up through the ranks to great success and that, in turn, made more owners want to take a chance on Black players.

“All these things made owners and general managers stand up and say, ‘Hey these guys can play this position in a very high level, so let’s start giving them more of an opportunity,"” he said. “And that’s all we’ve ever wanted was an opportunity. We didn’t want anything given to us.”

Reid said that while the league has been more open to hiring and starting Black quarterbacks, it still hasn’t made significant progress in adding Black professionals to coaching staffs and in front offices.

“The next frontier is coaching, but also front office leadership,” he said.

Earlier this year Miami Dolphins Coach Brian Flores filed a lawsuit against the NFL over allegations of discrimination after he claimed the league hasn’t done enough to hire and retain Black coaches.

Flores included text messages from New England Patriots’ head coach Bill Belichick, who congratulated Flores on getting hired by the New York Giants when he hadn’t yet interviewed for the position.

The Giants hired Brian Daboll before any candidates were interviewed, according to the suit. The Pittsburgh Steelers later hired Flores as a senior defensive assistant and linebackers coach.

“It definitely spurred the league’s effort to do more,” Reid said, referring to Flores’ lawsuit and allegations.