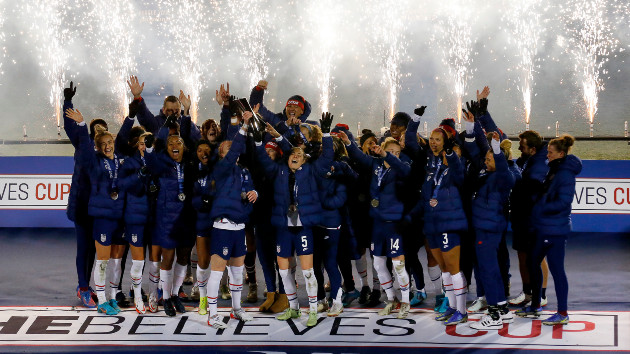 (FRISCO, Texas) — A day after reaching a historic agreement with the U.S. Soccer Federation in their equal pay lawsuit, the U.S. Women’s National Team scored big on the field, beating Iceland on Wednesday to win the SheBelieves Cup.

The U.S. shut out Iceland 5-0 to take home the title. It’s the team’s fifth SheBelieves Cup in seven attempts.

Midfielder Catarina Macario and forward Mallory Pugh each scored two goals for the U.S., with the fifth and final goal coming from midfielder Kristie Mewis in the 88th minute of the match, which was held in Frisco, Texas.

The victory came after the USSF agreed on Tuesday to pay $22 million to the players in the equal pay lawsuit, which will be distributed by the USWNT players and approved by the district court. USSF will also pay an additional $2 million into an account to benefit the USWNT players in their post-career goals and charitable efforts related to women’s and girls’ soccer. Each player will be able to apply for up to $50,000 from this fund, according to the settlement.

The lawsuit, which had been pending since March 2019, was filed by athletes on the world champion U.S. Women’s National Team against USSF on International Women’s Day, for gender discrimination.