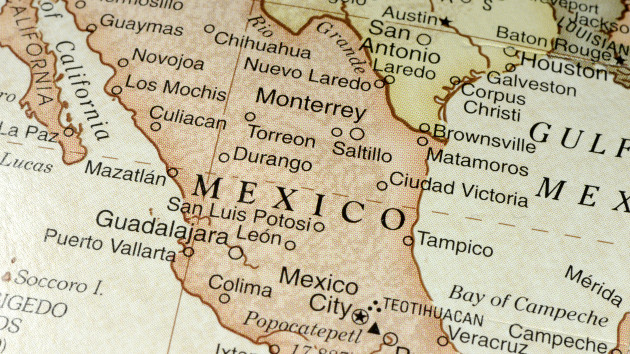 (MEXICO CITY) — In the hours and days after the horrifying school massacre in Uvalde, Texas, foreign governments around the world expressed their condolences to the American people.

But in Mexico, officials added something different — outrage, anger and calls to action.

“The gun lobby has succeeded in selling weapons of war, of a military nature, with the potential to leave victims unrecognizable, to civilians knowing the damage they cause. This failure to foresee, to prevent the damage is negligence, and the gun firms must be held responsible,” said Alejandro Celorio Alcántara, the Mexican Foreign Ministry’s legal adviser, in a tweet.

That vocal criticism is part of a new, more assertive stance by Mexico’s government against American guns, which have flooded into Mexico by the hundreds of thousands and helped fuel waves of violence.

Last year, Mexico sued 10 gun manufacturers and distributors in U.S. court for billions of dollars in damages — an unprecedented lawsuit that accused these companies of all but aiding drug cartels’ acquisition of arms.

Mexico has also pressed the issue repeatedly with U.S. administrations, calling for more frequent U.S. inspections at the border and enhanced technology to conduct them.

“In recent years, the Mexican government has carried out more and better actions to advance an agenda of arms control in the U.S. than the U.S. government can or wants to,” Ximena Medellín Urquiaga, a professor of legal studies at Mexico’s Center for Research and Teaching in Economics, tweeted Wednesday.

The outrage over the Uvalde killings is also fueled by the close ties the city has to Mexico. Some 78% of Uvalde’s 15,000 residents are Hispanic or Latino, according to the 2020 U.S. census, with the U.S.-Mexican border just 54 miles away.

“Just look at the last names” of the victims, Mexican President Andrés Manuel López Obrador told reporters Wednesday. “They are the children and grandchildren of Mexicans.”

But while López Obrador declined to answer questions on U.S. gun laws Wednesday, several senior Mexican diplomats did not hold back, including in blaming the U.S. gun lobby for violence on the southern side of the border.

“The horror. This will continue to happen as long as weapons are readily available. Whether it’s the 1st economy in the world, the 15th or the 190th. Parents lose their children. We all lose. The only winner is the gun industry. Let’s hold them accountable,” Salvador Tinajero, the Foreign Ministry’s deputy legal adviser, tweeted Tuesday.

Approximately 70% of the firearms recovered in Mexico from 2014 to 2018 came from the U.S., according to the U.S. Department of Justice — although that number could also be even higher because those are only the firearms submitted for tracing by Mexico’s federal government, not including those recovered by Mexican states, according to that U.S. watchdog report.

Experts say that enormous southern flow of weapons is because access to guns is much easier in the U.S. In contrast, Mexico has strict laws that all but forbid guns from public. While firearms are not illegal to own and keep at home, heavy requirements for ownership usually mean months of paperwork — and guns can only be purchased from the country’s one gun store on a military base in Mexico City.

Despite those restrictions, Mexico suffers from some of the worst gun violence in the world. Between 2015 and 2021, more than 141,000 people were killed with a gun across the country — a rate of homicide by firearm that rose 109 percent, according to the “Mexico Peace Index 2022” report by the Institute for Economics and Peace, a nonpartisan think tank.

Years of working with the U.S. government, including $54 million from the State Department between 2015 and 2019 to boost Mexican law enforcement’s counter gun trafficking, has not eased the problem.

Instead, in its lawsuit last August, the Mexican government took a page from U.S. gun safety groups by going after gun manufacturers like Smith & Wesson.

The companies “sell to any distributor or dealer that has a U.S. license to buy and sell the product, regardless of the buyer’s record of flouting the law and despite blazing red flags indicating that a gun dealer is conspiring with straw purchasers or others to traffic Defendants’ guns into Mexico. Defendants use this head-in-the-sand approach to deny responsibility while knowingly profiting from the criminal trade,” the lawsuit alleged.

The case has little chance at success because U.S. federal law largely protects gun manufacturers from being sued by victims of gun violence, and it’s unclear whether Mexico has standing to sue them in U.S. court.

In November, several manufacturers first moved to have the case dismissed, arguing in court again last month that any connection between their sales and the alleged damage is too far removed to make them responsible. Even more assertively, the National Rifle Association accused the Mexican government in February of “deflect[ing] criticism of their own failures by abusing the legal system to blame law-abiding gun manufacturers.”

But the political message of the lawsuit and another round of vocal Mexican criticism could have a more lasting effect, as the U.S. appears increasingly singular in its gun violence problem.

In remarks Tuesday evening, President Joe Biden noted he learned about the Uvalde massacre while flying back from his first trip to Asia, saying, “What struck me was these kinds of shootings rarely happen anywhere else in the world.”

His spokesperson at the State Department went further, saying the shooting has “implications for our standing” in the world. It even potentially makes the U.S. a “source of confusion, a source of disbelief for our closest friends and allies — worse yet, an object of pity,” Ned Price said Wednesday.

But for Mexico, it’s the U.S. as a source of guns themselves that looms largest — a destabilizing neighbor, according to some officials.

“Mexico is standing up to the gun industry in courts. Their negligent and profit-driven practices are wrecking havoc in our communities,” Guillaume Michel, head of legal affairs at the Mexican embassy in Washington, tweeted Wednesday.

Whether repeated incidents of that havoc will lead to any legal changes — in court or Congress — remains to be seen.

Americans among 8 injured in bus shooting in Jerusalem