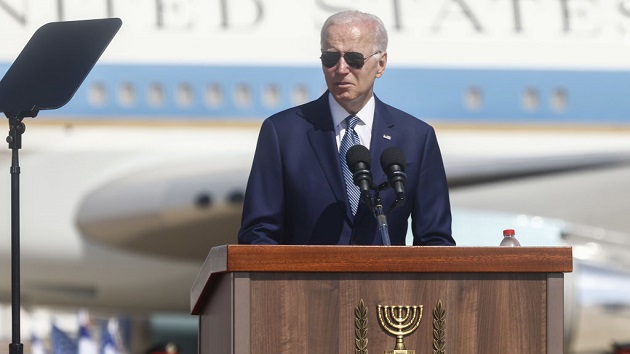 President Joe Biden on Friday, after a much-criticized meeting with Crown Prince Mohammed bin Salman, said he had raised the murder of Saudi dissident Jamal Khashoggi with the de-facto Saudi leader.

“I raised it at the top of the meeting,” Biden said of the case of Khashoggi, a Washington Post columnist based in the U.S., “making it clear what I thought of it at the time, and what I think of it now.”

“I was straightforward and direct in discussing it. I made my new crystal clear. I said very straightforwardly, for an American president to be silent on an issue of human rights is inconsistent with who we are and who I am,” he added.

Mohammed bin Salman’s response was that he was not personally responsible, Biden said. “I indicated I thought he was,” Biden continued about the 2018 killing at the Saudi embassy in Turkey that U.S. intelligence says the crown prince approved.

Before the meeting, Biden had declined to commit to raising Khashoggi’s murder and the Saudi record on human rights in general.

“What Jamal Khashoggi would tweet today,” Cengiz wrote on Twitter. “Hey @POTUS, Is this the accountability you promised for my murder? The blood of MBS’s next victim is on your hands.”

When asked about her statement, Biden said she was “sorry she feels that way” and continued to condemn Khashoggi’s killing as “outrageous.”

BREAKING: Pres. Biden says he raised murder of Jamal Khashoggi at top of meeting in Saudi Arabia: “I was straightforward and direct in discussing it. I made my view crystal clear…I’ll always stand up for our values.” https://t.co/o4hQ2HoBg4 pic.twitter.com/DaHI2Pv6B8

“The fist bump between President Biden and Mohammed bin Salman was worse than a handshake—it was shameful,” Washington Post Publisher and CEO Fred Ryan said in a statement. “It projected a level of intimacy and comfort that delivers to MBS the unwarranted redemption he has been desperately seeking.”

The meeting comes three years after Biden vowed, as a presidential candidate, to make the Saudis and MBS, as he’s known, a global “pariah.”

Nevertheless, Biden was given a warm reception on Friday in Jeddah as he sat across from the Saudi crown prince.

“Mr. President, welcome to Saudi Arabia,” said a smiling crown price, clearly delighted that Biden made the trip to his turf.

Mohammed bin Salman and members of the Saudi delegation appeared pleasant throughout their brief discussion, with the powerful Saudi leader appearing to nod as Biden spoke to him.

Before reporters were ushered out, they peppered the leaders, unsuccessfully, with questions, asking the crown prince if he would apologize to the Khashoggi’s family.

When one reporter asked Biden if Saudia Arabia is still a pariah state, a noticeable smirk was briefly spotted on Mohammed bin Salman’s face.

Biden, continuing his first visit to the Middle East as president, shared a fist bump with Mohammed bin Salman upon meeting him outside the Al Salam Royal Palace,, ahead of their highly-anticipated meeting despite criticism around the Saudi Arabia stop. The close-up photo of the moment was provided by the Saudis, who wanted it seen around the world.

Earlier, the president stepped off Air Force One in Jeddah and onto a lavender carpet — symbolic of blooming flowers in the Saudi Kingdom — shortly after 11 a.m. ET, descending the steps and greeted immediately by two individuals. He fist bumped the first greeter and shook hands with others. He then walked towards the “Beast” — the armored presidential limousine — stopping to greet a few other officials lined up for his arrival, accompanied by national security adviser Jake Sullivan.

Sullivan pushed back again Friday on a reporter’s suggestion that Biden was “dancing around” whether he would directly address Khashoggi’s murder, despite the slain journalist’s fiancé saying the White House assured her his specific case would be raised.

“I think it’s wrong to say the president was dancing around it,” Sullivan said, ticking through Biden’s statement on the matter.

“First statement, he doesn’t describe the details of what he is going to raise in meetings, particularly before he’s had them, because he wants to go have those meetings. Second statement, he always raises issues of human rights, and this will be no different,” Sullivan said.

Although, as a presidential candidate, Biden vowed to make oil-rich Saudi Arabia a “pariah” state over Khashoggi’s murder, the rapprochement in U.S.-Saudi Arabia relations comes at a time when gas prices have skyrocketed as the West has attempted to boycott Russian oil, ahead of the 2022 midterm elections, and as Biden faces calls to balance security interests with human rights concerns.

Biden has defended his trip to the oil-rich nation, writing in an op-ed for The Washington Post published ahead of his visit that “my aim was to reorient — but not rupture — relations with a country that’s been a strategic partner for 80 years.”

“As president, it is my job to keep our country strong and secure,” he wrote. “We have to counter Russia’s aggression, put ourselves in the best possible position to outcompete China, and work for greater stability in a consequential region of the world.”

But Sullivan on Friday ahead of the meeting downplayed any chance of an agreement from Saudi Arabia to increase oil production as a result of Biden’s meetings in the kingdom.

“I don’t think you should expect a particular announcement here bilaterally,” he told reporters on AF1. “We will discuss energy security at this meeting,” he said broadly, when asked if the public should expect an agreement.

Since taking office, Biden has spoken twice with King Salman, the crown prince’s father, who officially rules the country, but had dispatched Defense Secretary Lloyd Austin to serve as his administration’s point of contact with the crown prince, in what was widely perceived as a snub to the powerful Saudi leader.

On Saturday, Biden plans to attend a summit of Arab leaders in Jeddah, a meeting that the crown prince will also attend, though it’s not yet clear how the two leaders will interact or engage there.

Biden noted in his op-ed he would be the first U.S. president to fly from Israel to Jeddah, Saudi Arabia, describing it as a “small symbol” of the deepening ties between Israel and the Arab world.

US citizen imprisoned in Saudi Arabia over tweets