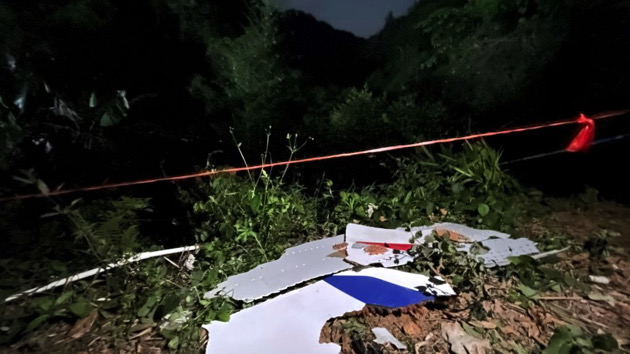 (NEW YORK) — One of two black box recorders was found amidst the wreckage of a China Eastern Airlines flight, giving investigators hope it will shed light on why the passenger jet plummeted from the sky and crashed into a mountainside in southern China, authorities said Wednesday.

None of the 123 passengers and nine crew members aboard Flight 5735 survived when it crashed in the Guangxi region.

An official from the Civil Aviation Administration of China confirmed Wednesday that one of the recording devices was located. The official said the protective exterior of the box was seriously damaged.

During a news conference Wednesday, Chinese authorities said that they believe the recovered device is the cockpit voice recorder. It was found in the main impact point of the crash and has been sent to Beijing for repair and analysis, officials said.

Authorities publicly acknowledged for the first time that human remains were found at the crash site.

Investigators are still searching for the second recorder which stores flight data, including airspeed, altitude and wing flap positions.

Early data shows the Boeing 737-800 plunged from 29,000 feet to 8,000 feet, leveled off and then went into a freefall, exploding into a fireball that was seen and filmed by people nearby. One video showed the plane nose-diving into the ground.

The plane crashed after taking off from Kunming, the capital of China’s Yunnan province. The flight was headed to Guangzhou, a port city northwest of Hong Kong, Chinese officials said.

Air traffic controllers made repeated attempts to radio the flight crew when they noticed the aircraft’s rapid descent but were unable to restore communications with the crew before the crash, Chinese officials said.

U.S. intelligence doesn’t have a clear theory on what led to the plane crashing. A source tells ABC News they aren’t ruling anything out, including a possible intentional downing.

As a precaution, China Eastern Airline grounded its fleet of Boeing 737-800s on Wednesday.

Members of the U.S. National Safety Transportation Board, the Federal Aviation Administration, Boeing and engine-maker CFM International are all joining the probe.

US considering new COVID restrictions on travelers from China

China sends 71 warplanes toward Taiwan after US passes defense bill