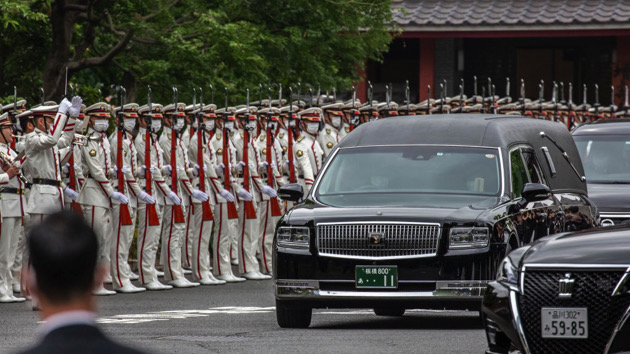 Abe was shot and killed in Nara on Friday while campaigning for a Liberal Democratic Party candidate.

Officials identified the gunman as 41-year-old Tetsuya Yamagami. Police are still investigating possible motives, but so far Yamagami has told the police he had “a grudge” against a “certain group.” But the authorities haven’t identified the organization or explained its connection to Abe.

The assassination — which was carried out using a homemade gun that police said may have been built by following an online tutorial — has shocked the nation. Gun use is strictly prohibited in Japan without a license, which are limited to hunting, sport or industrial purposes.

“Mr. Abe is one of the greatest prime ministers in Japan’s history. A lot of people look up to him. We are so sad that we lost him,” Shinki Kitaoka, who stood in a crowd in front of the Zojoji temple to commemorate Abe, told ABC News.

When asked about the apparent murder of the leader, Kitaoka said, “Everybody around me, all of my friends and family are shocked. The day I heard the news I just started crying immediately. It was so shocking.”

Yutaka Takeda, another onlooker who came to see the ex-prime minister off, described the shock he felt after the news broke last Friday as being similar to the shock he felt when he heard of U.S. President John F. Kennedy’s assassination in 1963.

A limited number of family members and those who were close to the former prime minister attended the temple funeral, according to Japanese media.

“I have lost my brother. But at the same time, Japan has lost an irreplaceable leader,” Defense Minister Nobuo Kishi, Abe’s brother, said in a statement, calling the assassination an “act of terrorism.”

“You were supposed to be the one giving the memorial address at my funeral. I enjoyed going often to drink and play golf together,” Deputy Prime Minister Taro Aso said in his memorial address.

Abe’s body was carried in a hearse from the temple and through the streets of Tokyo. Mourners lined the roadway and deeply bowed as the motorcade passed by.

The hearse made brief stops at the former leader’s Liberal Democratic Party headquarters, the prime minister’s office, and the parliament building, before arriving at the Kirigaya Funeral Hall, where Abe would be cremated.

Who will be the UK’s next prime minister? Here are the potential candidates