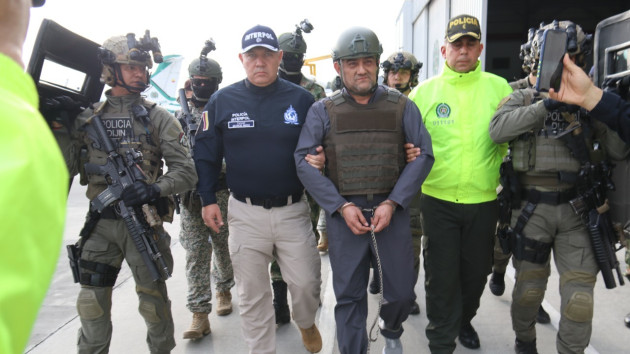 (NEW YORK) — An alleged Colombian drug lord believed to control the “largest and most powerful cocaine trafficking and paramilitary organization in Colombia” arrived in New York Thursday to face multiple criminal charges, according to federal prosecutors in Brooklyn.

Dairo Usuga, who is also known as Otoniel, was flown from Colombia to John F. Kennedy Airport overnight and made his initial appearance Thursday in Brooklyn federal court where he has been accused of overseeing the production, purchase and transfer of multiton cocaine shipments from Colombia and Mexico into the United States over many years, according to court records.

Usuga pleaded not guilty to federal charges and was ordered detained during his brief first court appearance.

“His face said it all,” said Ricky Patel, deputy agent in charge from Homeland Security Investigations. “He walked off the jet a defeated man.”

Usuga was arrested in Colombia in October 2021 at the request of the United States.

“Prior to his capture by the Colombian National Police, the defendant was the principal leader of a transnational criminal organization known as the Clan del Golfo (‘CDG’), the largest and most powerful cocaine trafficking and paramilitary organization in Colombia,” prosecutors said in a March court filing.

“In furtherance of its drug trafficking activities, the CDG, at the direction of the defendant, also engaged in repeated acts of violence, including murders, assaults, kidnappings, torture and assassinations against Colombian law enforcement officers, Colombian military personnel, rival drug traffickers and paramilitaries, potential witnesses and civilians,” the filing continued.

Usuga is charged with supervising and managing a continuing criminal enterprise, international cocaine distribution conspiracy and use of firearms in furtherance of drug trafficking.

For 20 years, Usuga sat atop Colombia’s most powerful drug cartel as it flooded the United States with cocaine and made billions, federal prosecutors said.

Under Usuga’s leadership, Clan del Golfo had what prosecutors called a “staggering capacity” for violence.

“His paramilitary organization, thousands of soldiers, including sicarios, or hitman as they’re called, murdered, assaulted, kidnapped and tortured,” U.S. Attorney Breon Peace said during a news conference announcing the extradition.

During a turf war with a rival criminal organization for drug trafficking routes, homicides shot up 443% over two years, according to the federal government.

Prior to his capture, the State Department had been offering a reward of $5 million.