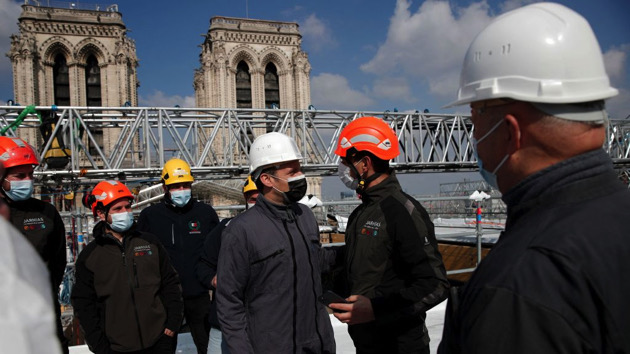 (PARIS) — Three years after flames engulfed Notre Dame, investigators are still trying to determine the cause of the devastating fire at Paris’ most famous cathedral.

French President Emmanuel Macron will visit the Notre Dame Cathedral on Friday to mark the third anniversary of the blaze, which tore through the roof and toppled the iconic spire as the world watched in horror on April 15, 2019.

“This visit will be an opportunity for the Head of State to take stock of the progress of the construction site,” the Elysee Palace said in a statement Thursday.

The initial phase to secure and safeguard what was left of the 12th century French Gothic landmark ended last summer, with the restoration work finally kicking off over the winter.

The safety, cleaning and reconstruction efforts are a vast national enterprise for France, with 90 state-sponsored contracts already issued to companies to help clean, consolidate and rebuild Notre Dame. In total, 130 such contracts will be issued, according to the public body established to oversee the restoration work.

After months of debate over the future of the famed medieval cathedral, the plans were approved by a national commission and “include the identical restoration of the oak wood frame and the roofing of the large attic as well as the restoration of the spire of Viollet-le-Duc,” the Public Establishment for the Conservation and Restoration of Notre Dame said in a statement Thursday.

French authorities are now in a race to meet the 2024 deadline set by Macron, in time for the Summer Olympics in Paris. On Wednesday, crews extracted the first hard stones to be used in the reconstruction of the arches of Notre Dame’s collapsed vaults.

However, the crews are working under sometimes difficult conditions due to the fragility of the building and amid interruptions linked to the COVID-19 pandemic as well as strict safety rules over the presence of lead on site.

There have been several surprises, too. France’s National Institute for Preventive Archaeological Research (INRAP) has been carrying out excavations inside Notre Dame since Feb. 2 and, last month, its workers discovered a mysterious lead sarcophagus buried beneath the cathedral.

“An endoscopic camera made it possible to identify the presence of plant remains under the head of the deceased, perhaps hair, textiles, as well as dry organic matter,” INRAP said in a press release in March. “Its dating and its identification remain to be carried out but it is probably about an important character, appearing perhaps in the register of the burials of the diocese.”

The next phase of reconstruction is set to begin soon, with stonemasons, restorers of mural paintings and sculptures, master glassmakers and artistic ironworkers starting work on Notre Dame’s fire-ravaged interior.

The epic restoration efforts aren’t just taking place in Paris, but rather across France. A thousand oaks trees are being cut in 45 sawmills across the country for the restitution of Notre Dame’s spire and transept.