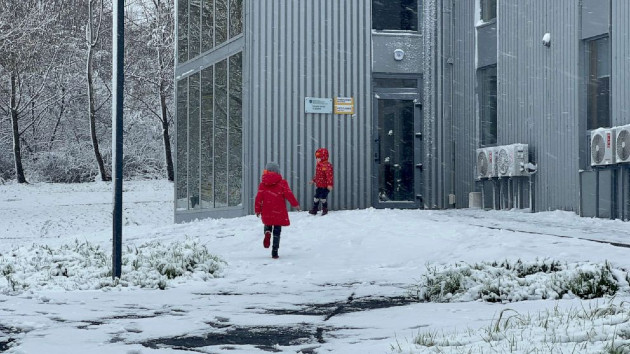 (LVIV, Ukraine) — Officials have warned that the city of Lviv, Ukraine, home to over 150,000 internally displaced people, could face a winter without power as they anticipate another surge in refugee numbers.

The mayor of Lviv, Andriy Sadovyi, told ABC News that the city, near the western border with Poland, is preparing to stay completely without power supply and natural gas supply because of Russian missile attacks which have devastated Ukrainian infrastructure in recent weeks.

To cope with the coming winter, a major construction project is now underway in the city in order to facilitate a new wave of people fleeing from regions badly targeted by Russian missile strikes which involves both renovating existing modular houses and building new ones.

Amongst the current refugee population, there is a mix of fear ahead of the expected drop in temperatures as well as overall hope in Ukraine’s long-term ability to secure a victory in the war.

“We hope that we will move to a different location as it becomes cold in here,” Ksenia, a 17-year-old from New York — a town in Donetsk region situated near the current frontline — told ABC News. She has been living in Lviv since this summer, when warmer temperatures did not pose such a challenge, with her mother, grandmother, brother and two cats.

Maria, 45, from Zaporizhzhia, has tried to retain her optimism. Asked by ABC News about her family’s plans for the future, she said: “Only victory and a way back home.”

Both Maria’s brother and son are currently serving in the Ukrainian army and her husband, also a military serviceman, has been missing since 2015.

Maria’s mother, Olga says, the conditions were different in the summer when they just moved into a temporary house designed for the families of four people. Due to the building’s thin walls, it can get very wet inside the home — the walls, doors and even their beds are covered with condensation and, sometimes, even with fungus.

These modular houses were a result of an urgent decision made in the early stages of the Russian invasion of Ukraine.

According to Mayor Sadovyi, five million people have moved through the city since late February and there were days when upwards of two million refugees were staying in Lviv at once.

“We were forced to come up with any decision to give these people an opportunity to sleep somewhere,” he said.

Now he plans to buy more powerful diesel generators to guarantee the city’s residents heating, even without complete electricity.

“Every medical facility and several boarding schools are supposed to have a generator as an alternative energy source, and a solid fuel boiler as a second heating source,” Sadovyi said.

A separate complex for young mothers and pregnant women was built in Lviv about three months earlier this year — a totally different type of accommodation that is resistant to low temperatures, is more comfortable and can house over 100 people at once.

Lilia Kilchytska, head of a charity called “Unbroken Mothers”, says that IDPs from Luhansk, Donetsk, Kharkiv, Zaporizhzhia, Mykolaiv and other partially occupied regions live there at the moment.

To provide electricity and heating for the children and their mothers, the center has been granted a power generator by an international charity organization. It has already saved the families during the several blackouts caused by the Russian missile strikes.

A large number of refugees have lost their homes because of the war. Besides temporary shelters placed at dormitories, malls, theaters, schools, hospitals and other social infrastructure facilities, the administration is actively searching for long-term housing projects for IDPs.

Officials are currently considering buying, building or renovating enough square meters for the forced newcomers to the region but money is scarce, and authorities have said they require more donations and financial support if they are going to scale up their efforts.

At the moment, there are only 1,733 places for refugees to stay in these renovated buildings in Lviv over the upcoming winter.

That number, according to the authorities, pales in comparison to the potential flood of people who may leave their homes in other parts of Ukraine as Russian strikes continue this winter.

Media freedom safe in Ukraine despite the war, officials say

What the midterm elections could mean for the war in Ukraine