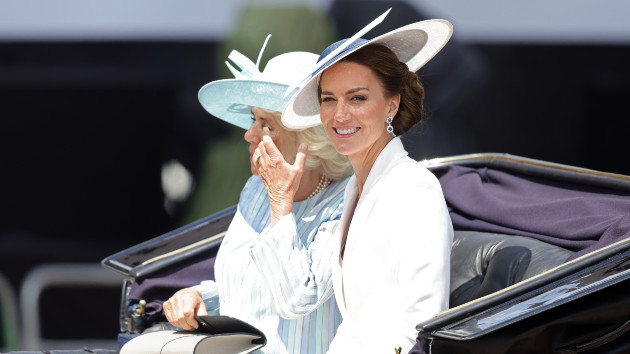 (LONDON) — Queen Elizabeth II’s Platinum Jubilee has brought the British royal family together as they celebrate the monarch’s birthday and 70 years on the throne.

The affair kicked off Thursday with Trooping the Color, a military parade, and among the royals in attendance were Catherine, duchess of Cambridge, who rode in a carriage alongside Camilla, duchess of Cornwall.

Kate wore a white ensemble, featuring an Alexander McQueen blazer dress and a blue Philip Treacy hat with a matching white accent on the brim.

Her outfit was reminiscent of Princess Diana’s white outfit from August 1991 when the princess of Wales wore a short-sleeved white dress, pearl drop earrings and a matching wide-brimmed white hat with two black bands to welcome the British Army’s Royal Hampshire Regiment back to Portsmouth, England, from the Gulf War.

Diana wore the ensemble again the following year at the Trooping the Color parade, which was held on June 13, 1992.

At this year’s Trooping the Color, the first parade to return to the center of London at Buckingham Palace since the pandemic began two years ago, Prince William and Kate’s children joined their mother and Camilla in the carriage ride from the palace to Horse Guards Parade in St. James’s Park.

He looked just like his dad William when he wore a sailor outfit to Trooping the Color in June 1985, when he was just 2 years old.

The 4-year-old is fifth in line to the throne while his grandfather, Prince Charles is first in line, followed by his father, William.

Prince William, Kate kick off their US trip: Latest updates

What goes into protecting Prince William and Princess Kate as they visit the US?

Prince William, Kate head to Boston: Everything to know about the couple’s first US trip in eight years