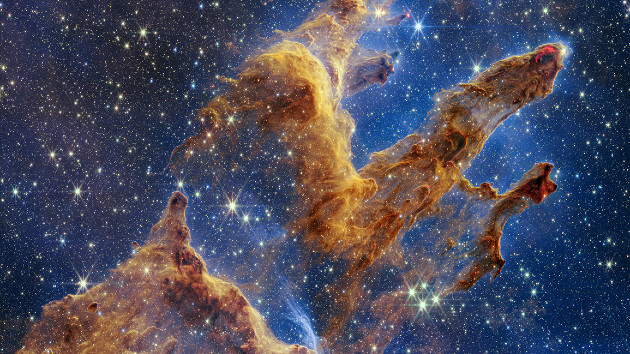 The image captures nascent, bright-red stars within a billowing cloud of gas and dust at an iconic stellar birthplace known as “The Pillars of Creation.”

The crimson protostars, estimated to be just a few hundred thousand years old, form when knots in the cloud gain enough mass that they collapse under their own gravity and slowly rise in temperature, according to a joint statement from the coalition behind the Webb telescope, which includes NASA, the European Space Agency and the Canadian Space Agency.

The scene is captured by the Webb telescope’s near-infrared camera, which affords the capacity to detect light from the first stars and galaxies. The telescope, launched last December, has delivered images to the public since July.

In this case, the image depicts a location within the Eagle Nebula, which stands 6,500 light-years away, the statement said.

The image of the “Pillars of Creation” will help researchers improve their understanding of star formation by identifying more precise star populations as well as the amount of gas and dust in the region, the statement added.

The “Pillars of Creation” was first captured by the Hubble Space Telescope in 1995. Since then, a host of increasingly advanced telescopes have been trained on the star-studded location.

The Webb telescope is the largest, most powerful telescope ever launched into space, the joint statement said.

Images released from the Webb telescope have featured Jupiter and the Phantom Galaxy.